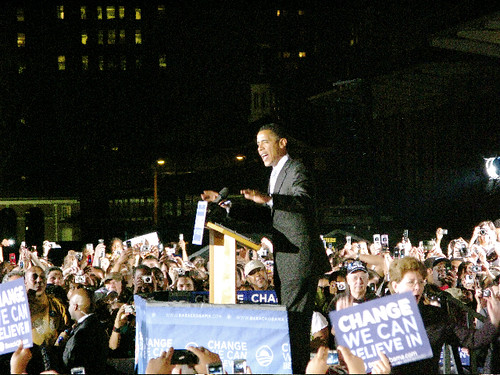 Just four days before the April 22 primary in Pennsylvania, Democratic presidential candidate Sen. Barack Obama made another campaign stop in Philadelphia. This time, the turnout was higher than expected.

Frank Friel, director of security at the Independence Visitor Center, estimated that 35,000 people attended a rally for the senator Friday night. This turnout has been the biggest one so far in Obama’s presidential campaign. The estimate increased from an initial prediction of 10,000 before the rally began, another official said.

In a joint effort, the Secret Service, local law enforcement agents and park rangers continuously scoped the area around Independence Hall for hours before the senator arrived.

The lines of people waiting for a chance to see Obama wrapped around Independence Hall and continued for several adjacent blocks. The crowd took its place around 6 p.m. and stuck around for more than three hours.

Obama began his speech by reminding people of the history of Independence Hall.

“It was over 200 years ago that a group of patriots gathered in this city to do something that no one in the world believed they could do – to declare their independence from the tyranny of the British throne,” he said.

His ongoing messages of hope and change were also present in his speech. Before a cheering crowd, Obama vowed to change the way politics is conducted in America.

“It is time to declare our independence from the broken politics of Washington – the type of politics that’s all about tearing each other down instead of lifting the country up,” Obama said.

He quickly turned the attention to the Iraq war by criticizing the current administration’s policies and the policies proposed by presumptive Republican nominee Sen. John McCain.

“I don’t think we can afford four more years of George Bush and John McCain ideas of economic progress,” he said. “It’s time to turn the page and write a new chapter in American history.”

He also criticized his Democratic rival Sen. Hillary Clinton and her “kitchen sink” strategy of negative attacks. He called Clinton a “committed” public servant, but also someone playing by the “same old Washington game.”

“She’s taken more money from Washington lobbyists than any other candidate in this race, even John McCain,” Obama said.
The rally came only two days after the most-watched presidential debate of this election cycle failed to meet many viewers’ expectations. Nielsen Media Research reports more than 10.7 million people tuned in for the debate.

Justin Backel-Balik, a student from Brandeis University volunteering for the Obama rally, said he thought the debate was not substantial.

“I think [debate network] ABC should be ashamed of themselves,” he said. “The first 45 minutes, there were no policy questions. I thought it was kind of ridiculous.”

One of Obama’s avid and most famous supporters, singer will.i.am also gave his take on the debate.

“I thought it’s sad that America is addicted to tearing itself apart and not realizing what’s best for it,” he said.

Julio C. Núñez can be reached at jottac@temple.edu.

Crowds full of Hillary Clinton supporters chanted “Stronger Together” during President Barack Obama’s speech campaigning for Clinton’s presidency in Philadelphia ahead of the 2016 election. Obama said Clinton is a “fighter” and she is the

“I think Betty would definitely support Hillary. She is all about female empowerment,” America Ferrera said. The Ugly Betty star spent the weekend canvassing Pennsylvania to rally supporters for Sen. Hillary Clinton. In an interview