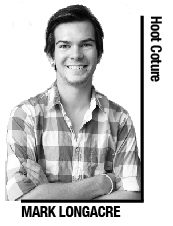 Columnist Mark Longacre takes a satricial view on the fashion at Occupy.

Lately, there has only been one important thing in entertainment news, and that’s Kim Kardashian’s divorce. Kardashian and Kris Humphries were married for 72 days – that’s true love. So why are news outlets wasting time on anything else like the Occupy movements? It just seems like a bunch of people sleeping outside and something about them being the Top 1 percent.

After riding on the Broad Street Line, I left the City Hall station and walked up the stairs waiting for the smell of couture, but all I smelled was pee and a hint of my cologne. I started to think maybe this Occupy Philly thing wasn’t exactly what I thought.

When I walked around, I saw a bunch of tents–like a camping ground. There was no point in wasting a good trip into the city, so I figured I’d check out what the City Hall ‘campers’ were wearing.

As I walked around, I saw a guy wearing a flannel shirt, which was totally last season from Lucky, and jeans with a pair of fingerless gloves. I tried to get a picture and ask him whom he was wearing, but he just looked at me. Take my word for it because I’ve never been wrong before: His ensemble was totally urban lumberjack chic. The perfect outfit for those cold nights and warm days camping out in the city.

I wasn’t discouraged though, because no celebrity wants their picture taken, so why would the occupiers be any different? I continued walking around and noticed a dapper looking gentleman rocking a Burberry scarf on top a light fall jacket and a pair of light wash jeans. It was totally something you could wear to read a book by a campfire at City Hall.

Another hot trend for the demonstration was knit wear. Everyone who is anyone with the movement was wearing something knit. Most were custom pieces hand knit right here in Philly. Tres Chic. One guy was walking around with a gray knit neck warmer and an oversized sweater. It was so Brooklyn in the late 1980s.

Although the fashion was interesting, I decided to learn more about the Occupy Philly movement. I ventured over to the information booth where Ally Nauss, a cute 20-something girl with an adorable mustard yellow off-the-shoulder sweater said the occupiers are actually the 99 percent, and they’re working to create awareness about the national movement through an intelligent, civil discussion.

It turns out I was completely wrong about the Occupy Philly movement, but after knowing what the movement was actually about, I had a million questions – how do they charge their iPhones? Fortunately, there was a cell phone charging station so everyone can stay informed about the national movement or play angry birds.

Once everyone’s juiced up, where do the “campers” go to the bathroom? There was a sign by the information booth listing where to find public-friendly restrooms during the day along with a reminder to be extra courteous when using facilities. At night, there are port-a-potties specifically for the protesters. Churches, missions and community members who are unable to protest, have also opened their doors to allow the demonstrators to bathe.

Fortunately, the occupiers have a place to keep themselves clean, but clothes need a nice scrub every now and then. Nauss said there are Laundromats and churches that help keep their clothes smelling nice and fresh.

Local support, like those lending their showers and bathrooms, has kept the movement going full force. The Occupiers are asking for donations from supporters of any kind, whether in the form of food, clothing or cold-hard cash. Community organizations have donated boxes of clothing for people to bundle up as temperatures drop.

Protesters have also turned to army surplus stores like I. Goldberg Army and Navy Surplus for inexpensive second hand clothing bought with donations. So eco-chic.

They even wrote a donation sign on a Coach shoebox. After seeing the man with the Burberry scarf, who ever said donations couldn’t be fashionable?

Mark Longacre can be reached at marklongacre@temple.edu.

Students rally for a slew of causes at Occupy Philadelphia. Senior neuroscience major Rand Williamson traveled to New York to observe the Occupy Wall Street demonstration, on Sept. 30. The next day, he was arrested.

Columnist Mark Longacre recaps top summer trends and offers ways to keep back-to-school wardrobes trendy. I’m back. Some of you remember me from “Hoot Couture” last year when Alexis Sachdev and I stirred up some