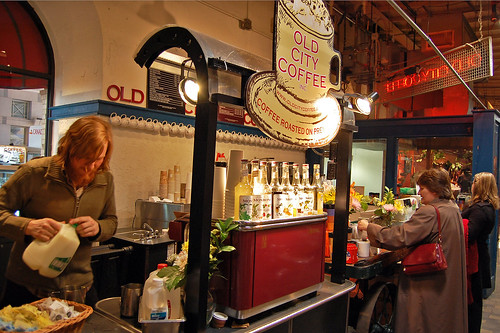 Whether sitting quaintly on a narrow cobblestone street or planted within the hectic Reading Terminal Market, Old City Coffee’s two locations embody the qualities of a “true Philadelphia coffee shop.” The stores’ products – not to mention its 24-year existence – have given it fame in both Center City and Old City.

“They roast it 10 blocks away,” said Tyler Ward, an independent contractor living near the Old City location. “It’s so fresh, it makes a big difference.”

“They don’t use substandard beans and then over-roast them, which is what Starbucks does,” said George Polgar, Ward’s business partner. “The other thing is, they keep the coffee maintained, and that’s the key. As soon as coffee hits the air, it changes the flavor. When other coffee shops pour it into those pump cans, it’s not coffee anymore. The urns they use here are not modern like those.”

Old City Coffee’s roast is far from the average Joe, too. Their locations are the only places in the city where you can find 100 percent Arabica coffee, which is why many say it’s the best coffee in Philadelphia.

Sandayani Saputra, who has been a manager at Old City Coffee for three years, said the variety keeps the customers coming back. Its location in the busy Reading Terminal also doesn’t hinder business – in fact, many go there specifically for the coffee.

“The coffee of the day is our best-selling product,” she said. “Local people always come over and grab a coffee in the morning.”
Old City Coffee has a tendency to make customers loyal – so loyal that they can’t live without it.

“We’ve been around a long time, and so has Old City Coffee,” Ward said. “So when we go on vacation, we take it with us. We buy the beans and take the cups, too.”

Another Old City Coffee customer appreciates the simple aspects of the shop.

Like the mornings, weekends at Old City Coffee are bustling. With a private café at the Old City location and a large public seating area at the Reading Terminal, customers feel inclined to stay awhile.

“It has a good weekend crowd,” Ward said. “The café is full every weekend.”

Everyone knows that Philadelphia residents are harsh in judgment, so Old City Coffee’s good reputation definitely says something about it. And its combination of locality, freshness and seniority render it deserving of this.

“It’s local to Philadelphia,” Saputra said. “So if you want real Philadelphian coffee with a really great taste, Old City Coffee’s the place.”

Carlene Majorino can be reached at carlene.majorino@temple.edu.

Although the baseball team is currently tied for third place in the Atlantic Ten Conference standings, they were on the losing end of an embarrassing defeat this weekend. The Owls (16-16, 8-4 A-10) suffered a

Christ Church vows not to disappoint

Summer Beckley goes to church to find out why the rest of Philadelphia is missing out on this gem.