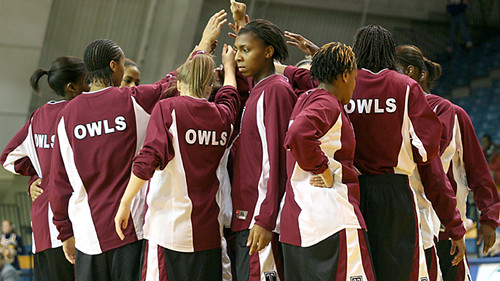 Ashley Morris knows the feeling.As the senior guard sunk two free throws to give Temple a 59-52 lead which put the game out of reach against La Salle Saturday, it was an experience she felt before.Morris and the Owls won another Big Five game – their 18th in a row – by defeating La Salle, 60-55, at Tom Gola Arena Saturday afternoon.The win also capped off a goal Morris wanted to accomplish before she graduated: win the Big 5 for four consecutive seasons. She and seniors Lady Comfort, Nicole Pittman and Candice Burrows never lost a city series game during their Temple careers.“[I’m] Real excited to do something for the program, [to] leave a mark on the program,” Morris said. “One of the things I wanted to do before I graduate was to leave knowing we left the Big 5 perfect. We won outright today, it means a lot to me.”Better late than never, Morris is having her best season in her final campaign.Morris started just one game in her first three seasons at Temple and only averaged 3.2 points per game in that span. Now, she has started all 23 games this season, averaging 14 points with 3.5 assists, and is considered the vocal leader on the team.“Our team wanted it. Ashley wanted it for her being a senior,” coach Dawn Staley said after Temple’s sixth straight victory. The Owls (13-10, 6-1 Atlantic Ten Conference) are now tied for first place in the A-10 with George Washington (18-4, 6-1) and Xavier (15-6, 6-1).It wasn’t the way Staley wanted to make history, but nonetheless the Owls are the first team in Big 5 play to win the crown four seasons in a row.“We never play well here,” she said. “It’s always taken some kind of performance by some person other than whom we think is going to play well.”Staley singled out Shaqwedia Wallace, who saw a considerable increase in playing time Saturday afternoon. The freshman guard scored 11 points with two steals in 27 minutes against the Explorers (9-13, 1-6).“I just felt Shaqwedia was ready to play,” Staley said. “She had a great couple of days of practice. Sometimes, you got to make a chance; it’s not hard for us recognize when that chance needs to be made.”Wallace said, despite being a freshman, she knew the importance of Saturday’s game and Big 5 matches in general.“It’s a legacy here at Temple and it’s something they’ve been doing for years,” she said. “I know how big of a deal it is. I just wanted to go out there and play hard, be a part of this.”Asked if she wanted to be like Morris and start – and continue – an undefeated Big 5 streak, Wallace already has it planned out.“I was thinking about that. We’ve got to keep it up,” she said.The 18-game win streak started on Nov. 8, 2004, with a 63-46 victory over Penn. It has continued this season with December victories over Villanova and Penn and last week at Saint Joseph’s.To Staley, a Philadelphia native, a streak like this is a big deal.“Bragging rights – it’s a championship,” said Staley, who is 33-7 in Big 5 matchups. The Owls have won the Big 5 crown in five of the last seven seasons during Staley’s eight years at Temple.“It’s something you play for and compete for and with Philadelphia being a rich basketball town. You want to be considered the best,” Staley said. “Not among the best, but be considered the best.”Morris knows what the Big 5 titles mean to her coach, the former star point guard at Dobbins Tech High School during the late 1980s.“She tries to tell us how important the Big 5 is, emphasizing it to the freshmen and the underclassmen,” Morris said. “But you actually have to experience it to really know what it’s about. Big 5 Basketball is a big part of what’s going on in the city. You can talk about it all you want but you really have to experience it.”As Staley gave her team off Sunday to watch the also-undefeated New England Patriots take on the New York Giants in the Super Bowl, she wants this to be an experience that continues for the foreseeable future.“Nobody really likes the people at the top,” Staley said. “We want to not be liked for a very long time in the Big Five.”NEXT UP The Owls will host Charlotte (14-9, 5-2) at the Liacouras Center Wednesday at noon in their annual Dawn Staley School Day.Temple will then play Xavier at the Cintas Center Saturday at 6 p.m.Pete Dorchak can be reached at pdorchak@temple.edu.