Rashid Zakat has been called many things from an elusive, professional student to a jack-of-all-trades. Zakat is probably most notably known around campus for the Soul Aquatics music and performance arts showcases held at a number of venues including the World Café Live. He is also a freelance producer, videographer and marketing strategist. 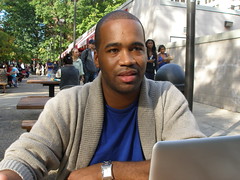 The Temple News: Could you summarize your college experience?

Rashid Zakat: My college experience has been interesting. I came to Temple in 2003, and my very first day at orientation, I met a bunch of really cool people that I knew I was going to become really good friends with. Since leaving home, I’ve been in and out of school several times, mostly because of money. It’s been interesting because things are completely different each time that I come back. And it’s weird kind of going out into the real world and then coming back into the college setting.

TTN: Why did you decide to take so many semesters off from school, and what did you do while you were away?

RZ: It was mostly money, but I remember one semester I just didn’t want to come back because I didn’t feel like I was getting enough real-world experience. I was already doing some freelance stuff, so I wanted to hop out there and find out what it was like, you know. I wondered what the landscape was like for what I wanted to do and do what I was already doing.

TTN: Tell us about some of the projects you’ve worked on.

RZ: I worked on some photography, video, strategic marketing campaigns and the like. I’ve worked with a company called Truly Unique Vision which is a marketing research and media company. Some of their clients included Ebony, Interactive One and PBS. I’ve worked with Maori Holmes, who is a professor here, on the Black Lilly Film Festival. I also did some freelance video work on the show Trading Spaces.

Quentin Williams can be reached at quentin@temple.edu.