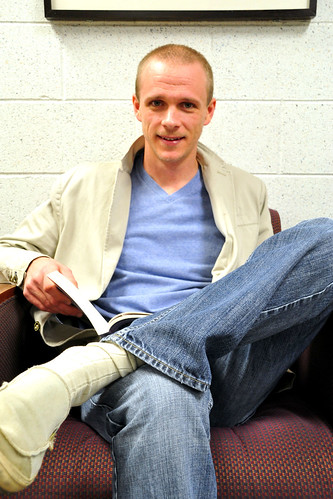 Utah native and war veteran John Worsencroft, a 29-year-old teaching assistant for Bryant Simon’s U.S. history 1877 to present class, shared his experience as a Sergeant Marine and how it has made an impact on his life.

Understanding the difficult transition from war to the classroom, Worsencroft–now pursuing his Ph.D at Temple–has talked at conferences and worked for community outreach programs, advocating for resources for veterans on college campuses.

The Temple News: Briefly, what did you do as a Sergeant Marine?

John Worsencroft: I joined the Marines when I was 18 years old. I joined the reserves, but after 9/11 my unit was activated, like a lot of units were. We spent a year in California training and then when the War in Iraq kicked off, we were sent to Iraq. I spent about six months in-country. We were part of the initial invasion force. We were part of the first marine regimen. Then we came home and I spent another four or five years in. I got out as a sergeant and toward the latter part of my time in the marines I was in charge of training other Marines to prepare for combat. We did a lot of training exercises around the world. Then I got out in 2006.

TTN: And then you decided to go to school?

TTN: Did you receive all your degrees in history?

JW: Yeah, all in history. I think my experience in combat and my experience as a Marine led me to want to study the things that I study, which is war in society. I look at questions of gender and masculinity and warfare and things like that.

TTN: Why did you decide to join the Marines?

JW: Well, first of all, I come from a military family. My dad was in the Navy, his brothers were all in the Navy, it’s something that’s very important in my family. And I think for myself, it was I wanted to serve my country and I felt it was the right thing to do. I don’t know why I decided to join the Marines though. I was very happy with my decision but I think it had a lot to do with the fact that a lot of my friends were joining the Marines.

TTN: How has being in the marines helped shape the things you’re involved in today?

JW: I wouldn’t say that being in the marines defined me, but it certainly shaped the direction of my studies. When I was at the University of Utah, I was the assistant director of the American West Center, which is a public history research center.

Also at the University of Utah, I worked on the Veterans Day Committee. And I guess the point I’m trying to get at is that being in the Marines and then also being a student has kind of opened my eyes to some of the struggles that a lot of veterans have reintegrating into society after they get back from combat. And I think that is especially a problem for people who go back to school. The things they experienced, the things they saw, makes coming back to school in some ways difficult.

TTN: What pushed you to become a TA?

JW: Becoming a TA is part of being here on a stipend, so it’s my job. But why did I pursue a Ph.D has to do with me wanting to eventually teach at the college level, and do research and write books and things like that. So part of being a TA is really training for teaching.

Lauren Hertzler can be reached at lauren.hertzler@temple.edu.

People you should know: Julia Ericksen

Sociology professor Julia Ericksen has dedicated her academic life to studying the difficulties women often face in a male-dominated world. Ericksen, who has been at Temple for 35 years, is responsible for developing some of

NICOLE UPSHAW is an Allied Barton security guard who greets students and faculty and checks Owl Cards as people flow through the doors of Speakman Hall.