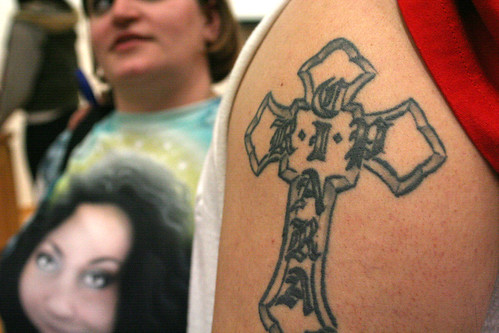 Ciara Deprill would have graduated from Temple this year.

Deprill was killed on Feb. 3, 2006, when she was the passenger in a car with a drunk driver. Two years later, her memory continues to motivate others through the lives of her family and friends.

From the time Deprill was a small child, she was a determined student who would not accept that anything was impossible, family members said. She excelled at an honors level in high school and took her strong determination with her to college.

Though Temple was one of Deprill’s top choices, it was not the choice that was necessarily the largest motivator.

“Her main goal was to be the first to go to college in our family,” said Candice Deprill, Ciara’s mother. “She really bloomed when she got to college.”
Deprill began studying education at Temple. Sharing her mother’s love for children, she wanted to become a teacher.

“She just had the heart of a kid,” her mother said.

“She was just so caring.”

Family, friends and education were Deprill’s top priorities. Her goals in life were to graduate college, become a teacher and raise a family of her own. Prior to graduation, she had also hoped to study abroad in Brazil so she could help the less fortunate.

Plazas and Deprill worked together at Jumpstart, a non-profit after school program for kids sponsored by AmeriCorps. Deprill spent the money she made there on activities and snacks for the children.

“Ciara was a really crucial part,” Hernandez said. “The kids in her group were lucky.”

By helping the children, Deprill had hoped to create success in their lives so that they, too, could help others, Hernandez said.

Hernandez said she experienced the selflessness Deprill had toward others first hand.

“Think of your best friends, and that’s Ciara,” Hernandez said. “She was someone who deeply cared about her friends. She didn’t realize the impact she was having on individuals.”
David Neto, a senior business management major, also knew Deprill as a very giving person.

“If you didn’t have something she did, she would give it to you,” Neto said. “Just being around her motivated you.”

Though friends and family were at the top of Deprill’s priorities, she made herself known to all through her caring personality.

“People will tell you, when Ciara walked in the room, you knew she was there,” her mother said. “She accepted everyone for who they were and what they were.”

It was Feb. 3, 2006, when driver Dreamah Knoll and Deprill were traveling westbound on the Benjamin Franklin Bridge when Knoll hit a concrete barrier. They were coming home from Club 27, where they worked together. Knoll’s blood alcohol level was 0.10 percent, two points above Pennsylvania’s legal limit. There were reports of “bad road conditions that night,” but the Delaware Port Authority has filed that 175 cars went through the area that night, with only Knoll’s car crashing.

Knoll will serve 90 days in jail without parole beginning May 27. She must also complete 150 hours of community service.  One of her tasks will be to talk to high school and college students about the dangers of driving under the influence. She will graduate from Temple this spring.

Although still grieving, Deprill’s family and friends have remained positive, lending their advice to others, some of whom have lost a loved one from drunken driving as well.

“You always have it in the back of your mind that if you were there, maybe things would be different,” Neto said. “It’s not easy, but live your life the way that person would want you to.”
Hernandez also noted the importance of keeping positive.

“When grieving, it is not a time to be modest, but be honest. It’s OK to be vulnerable,” Hernandez said. “You can let things in your life be destructive or constructive.”

Kylee Messner can be reached at kylee.messner@temple.edu.

Clean City: Philly Spring Cleanup stands as an example of the enthusiasm the city needs

Philadelphia has seen a wave of grassroots action in recent months. The tepid 10,000 Men organization held a community action fair this weekend in an effort to cut crime in the city’s most dangerous areas,