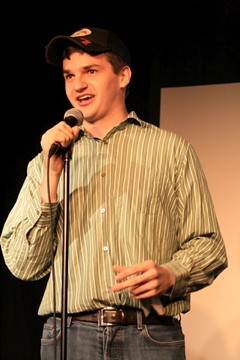 Being a stand-up comedian requires not only talent and skill, but also nerves of steel. When you’re given no script and set up in front of several judging eyes all waiting for the next big laugh, it’s hard to keep your cool – but that’s the beauty of improv.

The Philly Improv Theater celebrates improv daily and offers to the public classes, performances and a whole lot of laughs. Short for “improvisation,” improv is stand-up or situational comedy that does not use a script and demands that comics think on their feet and use their physical and mental skills to grab laughs.

PHIT, which came together in 2005, is the only improv theater company in the Philadelphia area. When founder Greg Maughan, 25, arrived in the city in 2001 to attend the University of Pennsylvania, he was startled to learn that not a single improv theater existed in the region. Maughan, who grew up in Detroit, had worked with Second City of Detroit, a well-known comedy troupe and organized the sketch and improv group Second Suburb.

Because improv theater groups exist in most major U.S. cities, Maughan assumed that it would only be a matter of time before one formed in Philadelphia.
“Four years later, I got tired of waiting and set one up,” he said.

PHIT’s first classes began in 2006 and the company quickly grew from there. Now Maughan and his trusted team of instructors and established improv performers are well-known within Philadelphia’s theater scene.

They teach a bevy of workshop-based classes that meet once for three hours and focus on improving acting technique and wit. With names like “Style-o-Rama” and “Scene Study,” these classes usually cost about $40 each and are perfect for the student who cannot commit to a weekly class schedule.

A course called “The Core” is the epicenter of PHIT’s teachings. The four-level, eight-week intensive curriculum begins with “Intro to Longform,” in which students learn the basics of improv with tools like the Armando technique. Students then become versed in the Harold technique, a form of group improvisation, and take an “Advanced Longform Class,” which allows students to break out of the stricter techniques and build unique routines.

Because Philly Improv Theater doesn’t currently have its own space for classes, most take place in the Philadelphia Ethical Society building in Rittenhouse Square.
The company doesn’t market to the experienced improv performer. Rather, it bills itself as a place for newcomers to learn skills.

“We want to train people, whether they want to perform or they just want to go out and take a class, blow off some steam and build their ability to get along with others or speak in public,” Maughan said. “There is a lot you can get out of the classes even if you don’t want to perform.”

If you’re interested in publicly displaying your improv skills, PHIT offers a number of performance options. The group’s current venue is the Shubin Theater, a 43-seat “black-box” space on Bainbridge Street. Performances take place every Thursday through Saturday, with some evenings featuring two shows. On Sundays, PHIT shows free movies – ranging from Monty Python to taped improv performances – in the theater.

Once a month, PHIT presents a satirical series hosted by Gregg Gethard that examines and pokes funs at society and politics. Each show has a different theme, and on April 2, Gethard and his band of merry comedians joked about hipster culture with “Bedtime Stories, Cocaine Sex Jams: A Tribute to Hipsters.” In March, they devoted a show to the HBO series, The Wire.

“The reason I come is because it’s cheap,” audience member John Coogan said. “How can you beat $5 and BYOB?”
Gethard agreed.

“Philly Improv Theater is the best deal in town,” he said. “It’s so under the radar. It’s like a comedy vortex. We consistently have the best shows in town, and that’s awesome.”

PHIT also hosts occasional benefit performances, including one held over the winter to raise money for Project H.O.M.E., a group that gives aid to the homeless. The idea for the benefit grew out of PHIT’s own misfortune when homeless people burglarized their former theater space, and the group lost thousands of dollars’ worth of sound and tech equipment.

Maughan said he hopes to eventually establish a theater and classroom facility just for PHIT.

“I see us in a big building on South Street, a main stage with classes, an office. I hope that the theater is known in the city as a fun and cool place to go with a pedigree,” he said. “I just hope they stop by.”

Selling bagels by the hundreds

Only a few days after Einstein Bros. Bagels replaced Taco Bell in the Student Center food court on March 17, the franchise became the No. 2 best-selling venue in the food court among all others

Their goal is simply to make a difference, one piece of litter at a time. The College of Education’s Making A Difference Project partnered with Tanner G. Duckrey Elementary School in North Philadelphia and held

The misconceptions and stereotypes that cloud the reputation of street art are quickly becoming ideas of the past, thanks to one man and his store. Eric Cohen is the owner of Rarebreed, a store dedicated