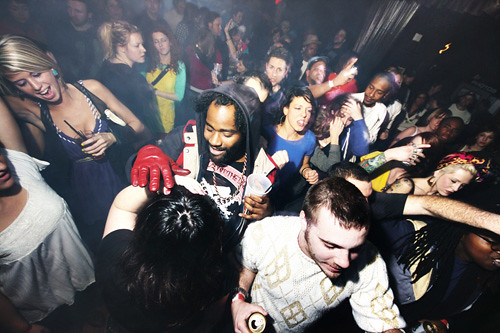 Paul Thorson, the one-time musician, sometimes painter and all-around artist, uses his camera to document “distinct moments” of the new subculture evolving in Philadelphia clubs. His favorite locations include the Medusa Lounge at 21st and Chestnut streets and The Barbary at 951 Frankford Avenue.

Urb Magazine’s Philadelphia release event, held at the The Barbary on Feb. 1, was a night of distinct moments indeed. Greeted by a woman-in-question named Candy, I paid my $5 cover and watched the place fill up. The diverse crowd, which ranged from hipsters to thugs in fur, had one thing in common: they all came to have fun. And fun it was, as techno and rap music blared and complimentary Colt 45s flowed steadily.

Thorson was on the scene, chatting with guests and snapping photos. Since many regulars know him, people approach him ready to pose.

“I interact with people,” he said. “Interesting people that let their personalities shine through the photos.”

The 27-year-old self-taught photographer began his endeavors in nightlife art as a musician. When his career in the band Panzer Division ended, he began photographing other bands when they played at different venues throughout the city. After meeting local videographer Dan Mack, he began expanding his photography to cover other aspects of the club scene.

A lot of networking and a few party promoters later, Thorson’s hobby became a full-time job. But taking pictures isn’t all he does – he’s also a full-time student at the Art Institute of Philadelphia.

“I don’t sleep much,” Thorson said.

Thorson’s photography can be found online at his Web site, Philthy.us. The site includes a gallery for each event he covers, as well as a calendar that allows partygoers and promoters to post and read about upcoming events. Philthy.us is not a typical pictures-from-a-party Web site. Each photo is professional, high quality and has a unique artistic flair.
“I like to portray other people’s idea of art, expressed through their fashion style,” Thorson said.

There is something deeper in Thorson, though – a quality that surpasses the fun times and cool nights. It emerged as we sat together in the chic Center City restaurant, Alma de Cuba. Low lights and sepia-tinted photos illuminated the walls and the simple question escaped: “How did you come up with the name ‘Philthy’ for your Web site?”

As Thorson elaborated on the economic and social conditions of Philadelphia, my initial perception of him changed. Thorson said he eventually hopes to become a photojournalist, taking pictures of destructed and war-torn cities around the world and allowing his photos to reveal the things he learned but couldn’t talk about during his year of service in the army.

“The way you capture a moment changes the way someone sees it. I want to capture things for what they really are,” he said.