Authors, like members of any other profession, have their own quirks and specialties. For instance, Dickens was particularly good at crafting memorable characters, while Hemingway is worth reading for the sound and rhythm of his prose style alone. Other writers specialize in particularly intricate plots, forceful ironies, or countless other literary foci. Steven Millhauser does ideas.

With Dangerous Laughter, the latest collection of short stories from the Pulitzer Prize-winning Millhauser, the idea-driven story is elevated to heights not reached since Ray Bradbury was in his short story-writing prime several decades ago. And not only are Millhauser’s ideas excellent – the stories he writes around them sparkle with wit and captivate the reader with their stylish, graceful prose. 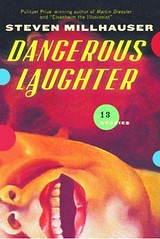 Dangerous Laughter is organized into four sections: “Opening Cartoon” (a rather charming existentialist take on Tom & Jerry), “Vanishing Acts” (tales of loss and disappearance), “Impossible Architectures” (chronicling folly, excess and the pursuit of impossible dreams), and “Heretical Histories” (Millhauser’s mind let loose on the alternate-history genre).
Tying all the sections and all the stories together is a sense of hubris. Millhauser’s characters are discontent in letting well enough alone; they are constantly striving to see over the next hill, to find greener grasses, to challenge those that would say “enough is enough” – consequences be damned.

It is in the description of these consequences that Millhauser truly lets his imagination run wild. His stories are filled with the riches of metaphors and a highly-developed sense of philosophical humor. Millhauser is a thinking man’s comedian, and the laughter his stories elicit is rightly called dangerous. With tongue firmly in cheek, Millhauser does for contemporary American society what only the best of satirists can: makes us simultaneously cringe with horror and laugh out loud at the follies and foibles we find surrounding us every day.

“Books weren’t made of themes, which you could write essays about,” Millhauser writes in “The Room in the Attic,” “But of images that inserted themselves into your brain and replaced what you were seeing with your eyes.”

Dangerous Laughter is certainly one such book. In rendering the familiar in fantastical, highly imaginative terms, Millhauser replaces our everyday perceptions – inured as they are to the very grossness of the culture we inhabit – with entirely new visions that, paradoxically, render our perceptions of the real world all the more real.
Later in the same story, Millhauser divides people into two categories: wakers and dreamers.

“Wakers had once had the ability to dream, but had lost it,” writes Millhauser.

Today, all too many of us have become wakers, stumbling through life with our imaginations kept tied up on a short leash. In Dangerous Laughter, Millhauser encourages readers to follow his lead in exercising their imaginations to the full extent possible – and have fun doing so.

The do-it-yourself music scene in Philadelphia is rapidly turning into the hope-someone-else-does-it scene. Aspiring young bands from all over the region that want to play Philly are finding it difficult to organize a show in

An oddly angled, neon cherry emblem stands proudly outside the perimeter of Johnson & Hardwick halls. “Main Campus Class of 1987,” the statue reads. While its message gets across, the statue’s meaning may be lost

The atmosphere in the No. 12-seeded Owls locker room afterwards was almost equivalent to their play during the game: quiet and weary.