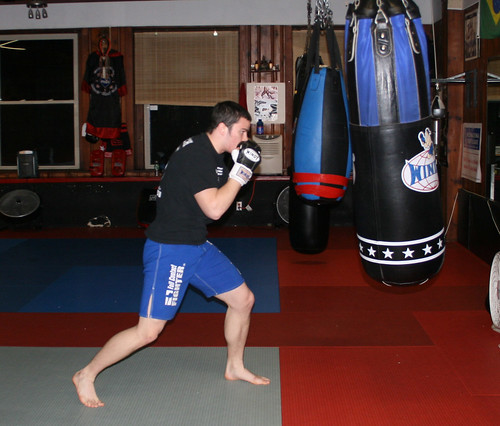 Senior film major Matt Makowski is a nice guy outside of the cage. His demeanor is polite, soft-spoken and gentle – but those who have squared off against him would probably say otherwise.

Makowski has an undefeated professional record (2-0) in mixed martial arts – an all-encompassing fighting style that combines wrestling, Muay Thai kickboxing and Brazilian Jiu-Jitsu – which has grown popular in the mainstream due to the Ultimate Fighting Championship. Makowski recently fought and won on the undercard of Showtime’s EliteXC pay-per-view.

“MMA is the greatest sport in the world, and it is also the greatest display of physical and mental talent, because to be a world class MMA fighter, you have to be incredible in all of these separate categories [of fighting], like kickboxing and wrestling and jiu-jitsu,” Makowski said.

Makowski balances his passion-turned-profession with studying film. He said he chose Temple because it would meet his academic needs, while being close to Philadelphia’s rich martial arts culture. After doing some research, he found the Philadelphia Mixed Martial Arts Academy, which played into his decision to come to Temple.

“Initially it looked like [Philly MMA] had everything that I wanted,” he said. “They had MMA, Muay Thai, Brazilian Jiu-Jitsu, wrestling and instructors that were fighters.”

“Matt’s just the kind of guy who trains so hard and believes in himself and his trainers, because if you put the work in and put the training in and believe in what you’re doing, then you know if you have already won or lost,” said Jackson Galko, an instructor at Philly MMA who also competes in Muay Thai and MMA. “If you go in and do your best, then that is really all that anybody could ask for – that’s Matt. He just outworks people and has a great team of trainers behind him.”

Makowski attributed his success to Philly MMA’s world-class training. He credited his head coaches –Rigel Balsamico, a two-time Muay Thai world champion with more than 30 professional fights; Wilson Reis, a world-champion black belt from Brazil who is undefeated in mixed martial arts; and Brad Daddis, who is both a pro MMA fighter and founder of Philly MMA – for molding him into the warrior that is he today. They demand excellence from him every day.

“The techniques that [our pro fighters] are using are the same things that we are teaching in class to regular students,” Galko said. “There is no distinction between what we’re teaching to the people doing it for fun or the pro fighters. We definitely win three out of four fights on average, and it’s due to the hard work of our coaches in preparing us, and the work ethic of the guys on the team.”
Galko said that there are several Temple students who train at Philly MMA as an alternative to the weight room. Many go on to develop healthier living habits, compete in amateur tournaments, and win, he said.

Fighting with a smart game plan is just as important as the physical aspect, Makowski said.

“His striking is his strong point, but, for example, in his last fight he fought a guy with a little more striking experience, a longer reach and possibly a better striker than he was, and Matt knew that he had the tools to finish it on ground,” Galka said.
Makowski said that the free hotel room at the Trump Taj Mahal, the post-fight interviews with Showtime cameramen and the thrill of fighting in front of 2,000 to 3,000 people are all aspects of professional fighting that he hopes to experience again, but he plans on waiting until he graduates in May for his next bout.

A professional fight takes two to three months of intense training, and the act of managing a professional MMA career while working toward a college degree can be a battle of its own. Makowski keeps busy by training and instructing at Philly MMA, as well as its sister school in Cherry Hill, N.J., for two to three hours a night, six days a week.

“I had to miss class for a fight and I was trying to explain it to my teacher,” Makowski said. “I asked her ‘ever hear of mixed martial arts?’ And it’s so hard, because when you say ‘ultimate fighting,’ they automatically think ‘Oh, you’re crazy.’”

Though he may have to put his career on hold, Makowski has high hopes for his future in MMA.

“I more or less want to enjoy where I am – I want to enjoy fighting and make a living out if it,” he said. “One day, [being] a world champion would be great, and the UFC is sort of where it’s at.”

Joe Frazier’s Gym, a North Philadelphia landmark at 2917 N. Broad St. above Glenwood Avenue for more than 40 years, has been closed for renovations. The closure will last at least three months, said Leslie

Blue Horizon: Knocking out the competition for 142 years

A castle-like dwelling sits on the corner of Broad and Master streets in North Philadelphia, its facade resembling a vacant show theater during the day, and as night falls, an eerie haunted house. From the