Believe it or not, there’s a new group on Facebook that encourages female members to submit pictures of their cleavages.

Messages posted on the group’s wall range from “Please feel free to add me” to “Wow, I love this sexy group.” 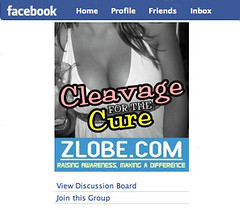 Female members in this group do more than supply cleavage photos. They are a part of a goal to reach one million Facebook members who want to find a cure for the breast cancer.

Created in October 2007, Cleavage for the Cure – One Million Strong! has more than 4,000 members. The objective is to raise awareness by gathering tasteful cleavage photos and creating a video on YouTube that mixes the best pictures with facts about breast cancer.

“I don’t think it’s a mockery because it helps raise awareness,” said Snyder, who joined the group after receiving an invitation. “Honestly, the person that created Cleavage for the Cure didn’t do it to solely raise awareness. He probably wanted to be the creator of a big group.”

It’s hard to say if Cleavage for the Cure’s original creator, David Angelino, should be regarded as a noble promoter for a good cause or the envy of college guys everywhere. After all, the group has 263 pictures of females flaunting cleavage.

The group also lists statistics about breast cancer. There are more than 180,000 new diagnoses a year, with more than 40,000 women dying each year. One in eight women will get breast cancer in her lifetime. Men are also diagnosed with the disease.

Guys can upload pictures to the group, but the majority of posters are female. Photos show women in bathing suits on the beach or in cocktail dresses. Others reveal them spilling out of their bras and tank tops.

“It’s a good idea because boobs are a good way to get attention,” said senior nursing major Melissa Majer, whose mother is a breast cancer survivor. “But it looks like some people in the group aren’t mature enough to handle the subject matter.”

One picture features a topless female with her arm carefully placed across her chest. To offset some of the sexually charged comments her photo received, the woman responded saying the picture was taken for a photography class and asked everyone to be courteous.

Posting anything obscene, vulgar or pornographic is against Facebook’s Terms of Use. Since none of the pictures contain nudity, the group is safe from being banned.

Majer said the group should extend its efforts in promoting breast cancer awareness to professionals in the medical field.

“[The group is] missing its target audience,” Majer said. “There aren’t many doctors on Facebook.”
Perhaps one member’s comment on Facebook best sums up the group’s efforts.

“This sure would be a really creative way to get a whole bunch of free pictures of boobs. I’m sure that’s not the case though, right?”

Kathleen Garvin can be reached at kathleen.garvin@temple.edu.

Foursquare like greeting strangers at door saying, ‘Please rob me!’

Foursquare and other forms of technology should be used with caution, as the applications advertise where you are and when you’re not at home.

College students take their chances on the Web

Zak Dombrowski a sophomore criminal justice major, and Jovan Hernandez, a senior human resource management major, are online poker players, and just may be part of a growing trend among college students in the United