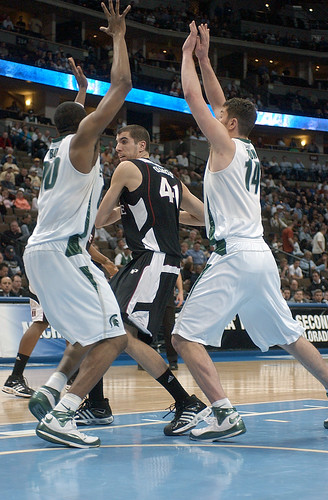 DENVER — The pageantry, which accompanied Temple’s first NCAA Tournament berth since 2001, quickly washed away following a 72-61 first round loss to fifth-seeded Michigan State Thursday at the Pepsi Center.

The atmosphere in the No. 12-seeded Owls locker room afterwards was almost equivalent to their play during the game: quiet and weary.

Certainly, being more than 1,700 miles from North Broad Street didn’t help. And neither did the Mile-High City altitude. Or the 12:30 p.m. tip-off.

Despite those factors, the Owls, who finished the season at 21-13 overall, weren’t about to make any excuses for why they couldn’t pull one out over the Spartans.

“It’s very disappointing because we thought we could’ve won this game,” sophomore guard Luis Guzman said, nearly whispering while positioned near a table in the desolate post-game locker room.

Now, in the aftermath of Thursday’s loss, the Owls have to face reality. Seniors Mark Tyndale and Chris Clark’s careers are over.

However, the two-time reigning A-10 scoring champion, Dionte Christmas, will be around for one last ride. And so will juniors Sergio Olmos and Semaj Inge.

Guzman, the Owls starting point guard for the majority of the season, and Ryan Brooks, a sharpshooter off the bench, both have two more years. Tack on three more years of service for freshman forward Lavoy Allen, who started in all but two games in his first campaign.

“Losing Tyndale and Chris Clark, it’s going to hurt our offense a little bit,” Allen said. “But [we’re] getting some new guys next year, getting some new big guys involved, Michael Eric, Craig Williams, so we’ll have a better rotation [among] the big men.”

Eric, a 6-foot-10 Lagos, Nigeria- native, is expected to join the Owls next season after he was deemed academically ineligible just weeks before the start of his freshman season. Williams, a 6-9 freshman who was credited with helping to toughen Olmos during practice this season, made one-minute appearances in six games during the regular season.
Philadelphia’s Public School Most Valuable Player Andrew “Scootie” Randall of Communications Tech will bring his 6-6 frame to Temple next season as well.
This core of returning and new players will attempt to improve on what the Owls accomplished this season.

They won’t be able to sneak up on opponents this time, though.

“We’re going to have work 10 times as hard then we did in this past offseason,” Brooks said. “We’re looking forward to getting back here and we know it’s not going to be easy.”

The thought that the Owls would have a shot at upsetting a team like Michigan State in the NCAA Tournament this season might’ve induced laughter a few months ago. But that was before things started to turn around.

After losing to then-No. 7 Duke at the Wachovia Center on Jan. 9, the Owls ripped off 15 wins over their next 20 games, leading up to their Atlantic Ten Conference Championship victory over Saint Joseph’s, where they notched their seventh consecutive win.

“I thought my teammates did a great job sticking with it, believing in the coaches’ gameplan, believing in their new system and down the stretch we started winning games at the right time,” Brooks said.

The Owls nearly went an entire month without losing before the Michigan State game. And Christmas didn’t enjoy re-experiencing that losing feeling Thursday.

“I definitely, definitely want to get back here next year again,” Christmas said as he spoke to media members from an elevated platform following the loss. “I don’t want to be sitting in this position. I want to be advancing to the next round.”

The redshirt-sophomore guard set a conference tournament record for made 3-pointers in the first half and scored 24 points in the Shockers’ 89-81 win against Temple on Friday at the Amway Center in Orlando, Florida.

Ken Anderson, Temple’s women’s gymnastics coach from 1986 to 2006, died on Thursday, March 20.  He was 52. As of press time, The Temple News was unable to confirm the cause or location of Anderson’s

Hip-hop is an imperfect, but charming, language. It is derogatory toward women, it thrives off power, sex and money, and it’s all one big bleep after all obscenities are taken out. But what great cultural