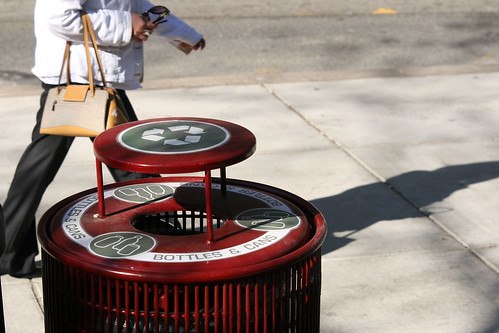 This year’s Spring Fling was a sea of green: recycling boxes on almost every corner, recycled plastic Frisbee giveaways, and student organizations tying environmental issues into their activities throughout the day. Green awareness was everywhere.

One of the main reasons for this “green” theme for Spring Fling was because of a recent emphasis on recycling on campus. This semester was the first time that outdoor recycling bins on campus existed. And some say they were long overdue.

Without Temple’s recycling department, campus may not have recycling available to students at all.

The head of the recycling department, Marshall Budin, has taken it upon himself to handle all recycling on campus with the help of just four student-workers and is still trying to convince the university that students want more recycling.

“He’s basically a one-man show,” said Matt Himmelein, a senior environmental policy major and president of Students for Environmental Action. “He definitely does all that he can to expand and come up with new ideas for recycling on campus.”

Luckily for Budin, SEA attempts to coordinate with the recycling office as often as possible to raise awareness about recycling.

“We just had our ‘Bury the Bell Tower’ event, which was sponsored by the SEA and the recycling office,” Himmelein said. “It was the first time we had a big outdoor event to raise awareness about recycling on campus. We went trash can-diving and took recyclables out of trash cans all around campus. Then we piled up all the recyclables at the Bell Tower and put a sign on it that said, ‘Shame on you!’”

While the event showed that students were using the outdoor recycling bins, the outcome of the event just wasn’t specific enough. The trash in the parts of campus without recycling was filled with recyclable items.

“It was, like, 200 pounds of recycling in the first four hours of a Monday,” Himmelein said. “So you could only imagine what it’s like on a Thursday afternoon.”

Part of the reason why more students don’t recycle is because it’s not as easily accessible as some would like it to be. The new outdoor recycling bins are only located at some hotspots on campus, rather than every few feet like campus trash cans.

The recycling center has a simple answer to these questions, and it is indeed a sad truth.

“It comes down to money,” Burns said. “How many outdoor recycling bins would we get? Who would empty them?”

Since the recycling department is so small, Temple’s bureaucracy doesn’t yet recognize recycling as a need for the university and the environment. However, many students are passionate about recycling, and are sure to be vocal about it.

“We recycle in our apartment, and if I don’t recycle, Ann is sure to yell at me,” said Courtney Clarahan, a sophomore tourism and hospitality major.

“Not having recycling in apartments around campus should be illegal,” the sophomore actuarial science major said.

Clarahan and Cerruti live in Temple Towers and are sure to use the recycling outlets, but said it isn’t as easy as it should be to recycle there.

“They could definitely be bigger,” Clarahan said. “They have some lids where you can only put something through the little opening, so when it gets full, it overflows through the top.”

As far as opening eyes around campus about recycling, Spring Fling was a success. However, it is up to the students to end their apathy for good and do whatever it takes to be good to the environment.

“I think the awareness part of Spring Fling is still working,” Himmelein said. “But too many people on campus just don’t know how their little bit that they give back actually makes a huge difference.”

Salah: Spring Fling is gone, if students like it or not

Spring Fling needed to go, and Temple is better off without it.

Spring Fling has been a Temple tradition for three decades. Upperclassmen can’t wait, freshman tingle with anticipation and teachers shrug their shoulders when most of their students don’t show up to class. The tradition comes

For the first time in 30 years, Temple is changing their grading system. Starting this semester, Temple professors will submit their grades electronically, eliminating paper forms. This is the first time since the 1970s that