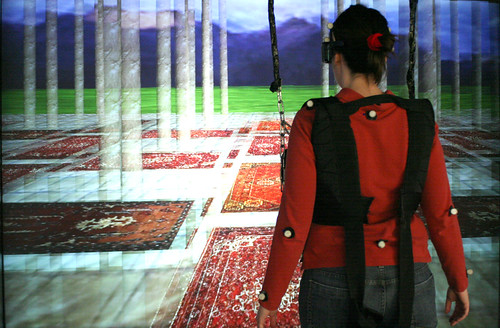 Temple researchers in the physical therapy department have created a virtual environment to study how an individual is able to keep their balance when placed in a busy setting.

Participants in the experiment were strapped to a moving platform, where they were asked to put on a set of 3-D glasses, all while focusing on the internal signals their joints were giving them. The experiment measures the effect of visual perception on an individual’s postural reactions.

Dr. Emily A. Keshner, chair of Temple’s physical therapy department, began experimenting with the idea of a virtual environment after studying vestibular disorders for more than 20 years. About 15 participants have been used in the experiment so far.

Keshner and her research team first trained participants to focus on the feedback they received from their joints. Participants are then tested in the virtual environment “to see if they can respond to their internal feedback when they are distracted by a busy environment,” Keshner said.

According to CNN, more than 6 million people in the United States suffer from chronic dizziness or imbalance, with numbers expecting to rise as the population gets older. As people age, their bodies become more prone to injury. Having injured a particular area of the body, individuals tend to minimize usage of the area, creating stability issues.

Keshner said keeping physically active can help issues, as well as prevent them in the future. Through physical activity, individuals are able to strengthen their limbs, and become more physically adapted to a busy environment.

Kylee Messner can be reached at kylee.messner@temple.edu