REVIEW – Michel Gondry has done it again. The ever-innovative Academy Award-winning writer and director, known for his masterful creativity and command of mise en scène, has filmed another gem of a movie, a heartfelt comedy that is as visually appealing as it is charming in script. 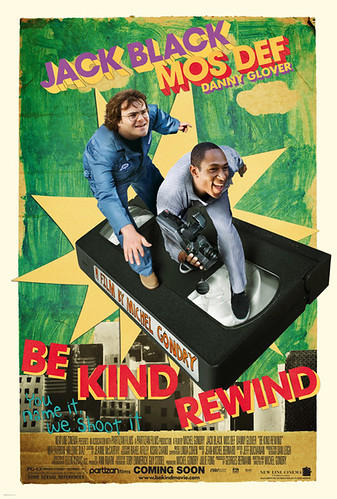 Be Kind Rewind, which stars an eclectic crop of actors (Jack Black, Mos Def, Danny Glover and Melonie Diaz among them) tells the story of a small, down-on-its-luck VHS rental store that becomes the center of a town-wide movement to fight against gentrification, the impersonality of big business and the censorship of creative thought.

The film likens to some of Gondry’s past ventures, recalling the inventive nature of 2006’s The Science of Sleep and once again playing with the concept of memory, as he did in 2004’s critically acclaimed Eternal Sunshine of the Spotless Mind.
At the same time, Be Kind Rewind is very much a departure for Gondry, a comedy in a discography of dramas. The film’s lightheartedness – and its characters’ lack of emotional complexity – might be off-putting for some Gondry fans, who will expect much more intellect than they will find. Others, however, will be able to appreciate Be Kind Rewind for its humor and ingenuity, both of which are served in heaping spoonfuls in every scene.

Be Kind Rewind is set in Passaic, N.J., a small downtrodden, ethnically diverse town just 10 miles outside of New York City. Black plays Jerry, a quirky local mechanic who lives in a trailer next to a power plant and is wild-eyed with paranoia and neuroticism. He believes that the power plant is trying to slowly kill all of the town’s residents with its “microwaves” and develops a plan to sabotage the plant, enlisting the help of his longtime friend and partner-in-crime, Mike (Mos Def).
Mike’s character is an interesting one: he’s an orphan, or so the movie implies, and lives and works at the Be Kind Rewind video store with his boss and father figure, Mr. Fletcher, played by Danny Glover. Little else is revealed about him except that he and Mr. Fletcher share a love for jazz music and pianist Fats Waller in particular. They both have an aversion to modernization, refusing to give up VHS tapes for DVDs. Their business struggles as a result, relying on a few loyal customers and a gaggle of hoodlum neighborhood kids to keep it afloat.

In a plotline that feels somewhat clichéd, Mr. Fletcher is told that unless he makes serious renovations to his dilapidated store, the building will be condemned and knocked down to make room for a condominium complex. Knowing that he’ll need money to fix up the store, Mr. Fletcher decides to go on a trip to find out what makes other video rental stores so successful. Not wanting to worry Mike, he tells him that he’s going to an event commemorating Fats Waller’s life and career and leaves him in charge of the store. His only demand is that Mike does everything in his power to keep troublemaking Jerry away from Be Kind Rewind.

Of course, Mike and Jerry’s attempt to break into the power plant doesn’t go as well as expected, and Jerry gets caught in an electromagnetic field that leaves him shaky, nauseous and magnetized. Gondry has a field day with this, seizing every possible opportunity to show Jerry twitching, lurching sideways into metal poles and emitting tiny lightning bolts from his fingertips. Things start to get crazy at this point: Jerry’s magnetic self accidentally erases all of the videotapes in Be Kind Rewind, leaving a couple of customers very angry and Mike on the verge of a nervous breakdown wondering what will happen when Mr. Fletcher finds out.

The two decide to take matters into their own hands, using some old-fashioned video equipment and household props to recreate the movies they rent, from Ghostbusters to Back to the Future to King Kong to Rush Hour. Extremely low budget but often much more entertaining than the original films, these remakes are a surprising success with the Passaic townsfolk, who can’t get enough of Mike and Jerry’s creative spins on classics. With the help of an enterprising young Latina woman named Alma (Melonie Diaz), whose disappearing and reappearing mustache is a running joke in the film, they’re able to make a profit off the movies, telling people that they’re “Sweded,” or imported from Sweden.

Black, Mos and Diaz have striking chemistry in Be Kind Rewind, their very different characters entirely believable as good friends. Unfortunately, their relationships with each other aren’t as developed as they could be – the foundation for something romantic between Mike and Alma is laid but never built upon, and when Jerry lets his small town celebrity get to his head, there’s opportunity for plot-driving conflict that Gondry doesn’t explore.

One gets the feeling that a lot of cutting was done to the film – Jerry’s character is the most complex, but Alma, Mike, Mr. Fletcher and the others in the film seem flat at times.

When Mr. Fletcher returns from his trip, he comes with a new set of policies that he hopes will revolutionize Be Kind Rewind. Cynicism has set in, and he decides to go against his ideals and starts renting out DVDs. The money Mike and Jerry have made by “Sweding” films isn’t enough to save the store, and it’s gotten them into legal trouble, too. But now that the whole community is involved, it’s hard for Mike and Jerry to give up their filmmaking, and they ultimately return to the camera, this time to create something entirely unique – a Fats Waller biopic that alters both his history and the future of the video store.

Be Kind Rewind is a delight to watch, a sweet comedy comparable to Napoleon Dynamite or Juno in that it has very little mean spirit and gives high fives to the underdogs. Each scene is rich with vibrant colors and smooth jazz, and Gondry’s imagination has never been more bizarre or entertaining. It’s no Eternal Sunshine, but it’s got the right ingredients to win a lot of hearts.