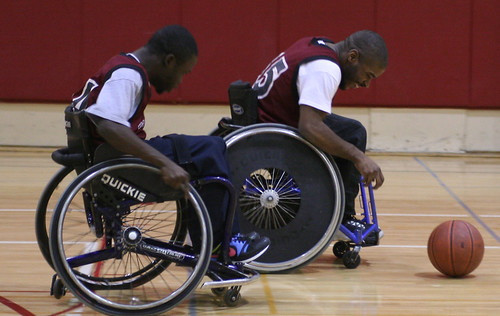 Players race down the hardwood, dribbling and passing the ball. A foul is called and a basket is made. These are all the sights and sounds of a familiar game.
But this scene doesn’t include Dionte Christmas or Lady Comfort.

This is Temple’s wheelchair basketball team, the Rollin’ Owls.

“It’s been nothing short of amazing,” Scott Gordon said about his time playing on the team. “It’s given me so much confidence in myself as a person with a disability.”

Gordon, a first-year law student, is in his fourth season with the team and is paralyzed from the waist down after a car accident in June 2003. Like Gordon, each player has their own story about how they got here, as both a person with a disability and as a player. The sport itself also has a story.

Wheelchair basketball dates back to the 1940s in Veterans Administration Hospitals across the United States, when World War II returnees with disabilities would come back home looking for an activity to join. The sport quickly spread in 1948 when the National Wheelchair Basketball Association was formed.

The Rollin’ Owls, a member of the Division III NWBA and part of the Mid-Atlantic Conference, was founded in 1984 by Renee Kirby, who now serves as Temple’s assistant director of Disability Resources and Services. The Rollin’ Owls were the first East Coast team of its kind to be established. John Noisette, the team’s first coach, served at the position from 1984 to
1988.

Noisette’s true legacy, though, came off the court.

“John did a lot of things with the university, but he was the first person I learned from in terms of working with disabled athletes,” current coach and Adapted Recreation coordinator Tribit Green said. “I followed what he wanted me to do in trying to make sure the team plays together as a team and understand that we are also teaching life skills and not just basketball.”

Noisette, who also served as professor of therapeutic recreation in Temple’s Department of Recreation and Leisure Studies, passed away at the age of 78 on Dec. 4, 2007. His memory and goals live on through Green.

“Coach Green is by far the best coach I ever had,” freshman guard Anthony Diloreto said. “He has a real understanding of the game, but also his relationship with the players is what separates him.”

While Green is not in a wheelchair himself, he still is able to have success coaching because of the vast similarities between wheelchair basketball and the kind that’s played in college or the NBA.

The basket is still 10-feet high and the free-throw and three-point lines are the same distance as in college basketball. Also, the offensive and defensive plays run by teams are primarily the same as non-wheelchair leagues.

The major differences, though, include a four-second lane violation instead of three because wheelchairs cannot move laterally. Also, to avoid traveling, players cannot push their wheelchair in any direction more than two times before having to tap the ball onto the floor at least once.

Teams cannot exceed 12 points on the court at the same time. This is so a team does not have an advantage at any time by placing five players on the court with the most amount of mobility.

The Rollin’ Owls are made up of eight players. Four who are enrolled students, two Temple alumni and two who are from the local area. This season, through Friday, the team has a 12-6 record and plays their home games at the gym at Pearson Hall 100.

A few of the Rollin’ Owls said the game is much more than wins and losses.

“Wins aren’t that important,” Green said. “I like to win, but winning and losing is the same thing, just it’s on the other side of the coin. The most important thing is that you don’t quit.”

Senior Matt Clark has Lumbarsacral agenesis, a disability where he was born without his last five vertebrae.

Clark said that while some people may look at him or his teammates as inspirational, that’s not why he plays.

“I think most of the guys on the team think ‘inspirational’ is a dirty word.

Gordon said playing basketball has made his life and self-image better.

“When I am in the game, I don’t notice that I’m paralyzed. I’m completely in the moment,” Gordon said.

Diloreto, who was born with osteogenesis imperfecta, a condition that causes the bones to become brittle, also said his time playing for the team has gone beyond just basketball.

“Here, I’ve learned life lessons like teamwork and leadership that will help me throughout my life,” said Diloreto, who has also participated in sled hockey, a sport similar to ice hockey. “I think there’s a perception that if you’re in a wheelchair, you’re limited in sports, but we aren’t.”

Kevin Smiley can be reached at kevin.smiley@temple.edu.