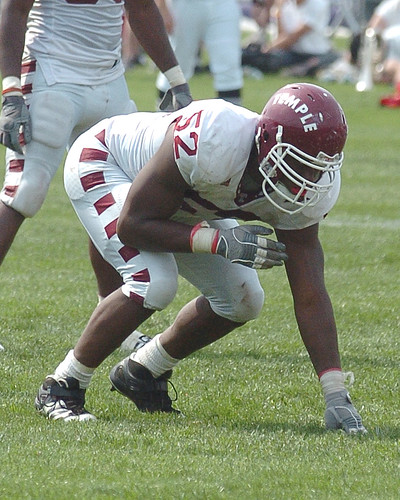 AMBLER — Juniors Wilbert Brinson and Brian Sanford used Saturday’s Cherry and White intra-squad game to conclude a progressive spring for them on the defensive side of the ball.

Sanford, a 6-foot-2 defensive end, scored a touchdown on a fumble recovery while Brinson, a 6-foot defensive back from Cheltenham, Md. recorded a team-high eight tackles for the Cherry squad, which defeated White, 21-6, at the Sports Complex.

“I had to come out here and prove something,” said Brinson, who had four tackles in eight games last season. “I am a second-teamer right now so hopefully this will move me up on the depth chart and give me a little bump towards the fall.”

Brinson said a good showing in spring practices and the annual intra-squad game will help him when the Owls’ season starts against Army in West Point, N.Y., on Aug. 29.

“The spring went good,” he said. “I played cornerback and strong safety. I’ll play wherever they put me. I just want to be out there helping my team.”

Coach Al Golden noticed Brinson’s performance and said he is pleased with how he is improving day-by-day.

“Wilbert’s a guy who can do a lot of things for us,” Golden said. “He’s fast and he’s got some length. He’s playing corner and safety for us [and] he should be a special teams’ guy for us – he should be able to block punts for us, too. That’s the challenge for him. I hope he made progress today.”

As for Sanford, who played for the White squad, he is coming off a 2007 campaign in which he played in all 12 games for the Owls and recorded 23 total tackles.

Other than his end zone fumble recovery, which tied the game at six with two minutes left in the first quarter, Sanford only registered two tackles for the White squad.

“Right place at the right time I guess,” Sanford said jokingly about the touchdown. “[Jeff] Wathne got under his block and got his hand on the ball, I just fell on it.”

At halftime, Sanford was named the winner of the Mark Bresani Award, which is given to the player that shows outstanding spirit and enthusiasm.

“It was a shock,” Sanford said. “When they called my name I was still on the bench and didn’t think they really called me. But it feels good. I get hyped for every practice and I am excited about the team because I know we are going to do well this season. We are really coming together a lot and a result of this is that we can have higher expiations for us.”

Last season, the Owls were best in the nation in red zone defense, allowing only 20 touchdowns in 47 close-range trips by opponents.
When asked how they were going to achieve that again, Brinson said, “Our defense is like a tornado, we just keep getting stronger.”

This past Sunday, the women’s tennis team served, hit and volleyed their way to a 4-0 win over Xavier in the finals of the Atlantic Ten Conference Women’s Championship to capture their fourth A-10 crown