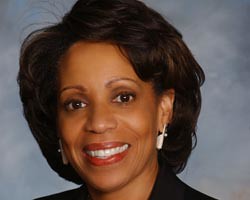 The search for a new dean of Temple’s James E. Beasley School of Law ended with President Ann Weaver Hart’s announcement that JoAnne A. Epps, currently associate dean for academic affairs of the law school, has been selected for the position.

“I am thrilled but humbled by this opportunity. Temple Law School is at a wonderful place in its history and it is exciting to be selected to help guide its future,” Epps said.

The former assistant United States attorney will take over July 1 of this year. She said she looks forward to her new position and the possibilities being the new law dean will offer.

“I am excited about continuing the scholarly achievements of our faculty, while at the same time retaining our commitment to outstanding teaching,” Epps said. “I also hope to increase the connections between Temple law school and the Philadelphia community by partnering on issues of mutual interest.”

Reinstein, the longest-serving dean among American law schools, served over expansive growth in the law school from 1989 to 2008. The law school’s endowment ballooned from $4 million to $57 million, and faculty increased by 20 percent. This fall’s entering class has the highest academic record in the law school’s history, according to the release. Some 4,800 applicants, double the number of applicants in 1989, compete for 300 positions.

In his role as vice president for international programs, Reinstein oversaw tremendous growth at Temple University Japan and further developed Temple Rome into one of the top American study abroad programs.

Reinstein, who joined Temple’s law faculty in 1969, served as a law professor and the university’s general counsel from 1982 to 1969. Prior to Temple, he was a contributing attorney for the NAACP and fought to integrate the Philadelphia Police and Fire departments, and other groups.

“It is humbling to follow Dean Reinstein. He has been an outstanding dean and has truly made the law school into an internationally recognized institution,” Epps said.

Serving as the associate dean for academic affairs at Temple Law since 1989, Epps’ responsibilities included serving as the principal liaison between the dean’s office and faculty, assisting the dean in all faculty and personnel decisions, overseeing student-centered administrative operations and assisting with fundraising efforts.

Epps has also taught since 1985 as a visiting assistant professor, before a promotion to full professor in 1994. She also served as I. Herman Stem Professor of Law – a rotating chaired professorship distinguishing teaching excellence – from 1997 to 2000.

Working as a deputy city attorney from 1976 to 1980 and an assistant U.S. attorney from 1980 to 1985, Epps gained the experience and authority needed to co-author her several articles and books used by law students and lawyers.

Epps received her bachelor’s degree from Trinity College in Hartford, Conn. in 1973 and earned her law degree from Yale Law School in 1976.

“I think Temple University is a wonderful place to receive an education, and I am delighted to continue to be a part of it,” Epps said.

Sarah Fry can be reached at sarahfry@temple.edu.
Staff Writer Christopher Wink contributed to this report.

Spring Fling is finally here, and this year’s theme may be the most memorable yet.