NEW YORK – A young Mick Jagger sits appeasing a journalist with a boyish grin on his face. The journalist asks, “Can you picture yourself at the age of 60 doing what you’re doing now?” Jagger answers, “Oh yeah, easily.” 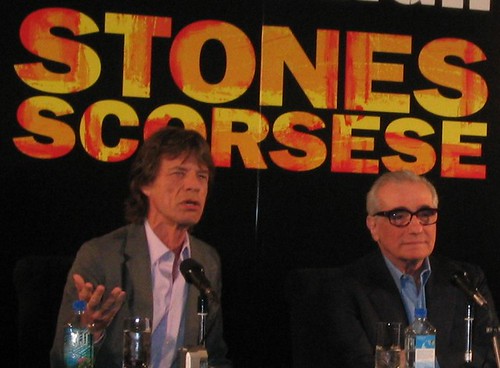 When Jagger first takes the stage in Martin Scorsese’s new concert film, Shine A Light, to be released in IMAX and regular theaters April 4, he bursts upon the frame and the mic stand like a hurricane. But this time on film, he is 63.

The first Jagger appears in a series of short archival interludes that Scorsese has edited into the film. The director presents the young Rolling Stones who seemingly have no idea of the musical impact and long-term success that lies before them. Neither does the press, most of whom viewed the Stones as degenerates.

Scorsese and the Stones have long been associated, yet only through musical use in Scorsese’s films. He has even used “Gimme Shelter” twice – Goodfellas and The Departed.

“Mick jokes that Shine A Light is the only film of mine that ‘Gimme Shelter’ is not played [in],” Scorsese said at a press conference. “When I use it, I don’t remember that I’ve used it before. I say, ‘Let’s use that.’ And [my editors] say, ‘Marty, you used it before.’ And I say, ‘It’s alright, let’s put it in!’ It’s something that’s been very important to me all these years.
Shine A Light was born on the Stones’ recently concluded A Bigger Bang world tour. Scorsese was the Stones’ first choice when the band had an idea to film the tour.

Scorsese disagreed with Jagger’s original idea to film their show on a scheduled performance on a beach in Rio de Janeiro, Brazil.

“I realized I was better suited to capture [the Stones] on a smaller stage,” Scorsese said. “I wanted the intimacy of the group and what it was like to see the band at work together and work each song.”

“I said, ‘The laugh is, Marty, that this intimate concert is going to be blown up in this huge IMAX thing,” Jagger said.

Scorsese and the Stones decided on the famed Beacon Theatre in New York City.

“The Beacon Theatre is special for some reason,” guitarist Keith Richards said. “The room sort of wraps its arms around you. Also, this band didn’t start out in stadiums.”

A two-night engagement was set at the Beacon in October 2006. More than 18 cameras were manned by cinematographers from films like The Lord of the Rings trilogy, There Will Be Blood and Sleepy Hollow. Jack White, Buddy Guy and Christina Aguilera made surprise guest performances.

Jagger said he enjoyed playing a smaller venue for a change.

“We had played lots of small theaters in the past, but we hadn’t done it on this tour. So this was quite different to go into a small theater,” Jagger said. “I felt really good about that second night.”

“It was a turn-on,” guitarist Ronnie Wood interrupted.

“Career-wise, it’s always great fun to try these things that are slightly different,” Jagger said. “But they’re also a challenge.”

Scorsese attested that the challenge paid off, as he acquired the visuals he had hoped for.

“For me, it was literally the moments you could see the band working together. Each song had its own story. The whole sound of the band is like a character,” Scorsese said. “We had these great cinematographers. They were like poets at times, being able to know exactly when to move their camera and pick up another member of the band.”

Scorsese’s crew filmed on 35mm cameras, which meant they constantly had to be reloaded with film. Anticipating these obstacles, Scorsese made sure he had enough back-up cameras to catch every moment.

“We got into the spirit of making the movie, as well as enjoying the audience and the band,” Jagger said.

Almost in an echo of the past, a journalist asked the band if they could see themselves doing what they’re doing now when they are in their 70s. Richards laughed and said, “That’s only five years away.”

Jesse North can be reached at jesse.north@temple.edu.

During its last match, night already falling, the fate of the men’s tennis team had already been decided as the Owls were about to lose their fifth straight contest on a chilly Friday. However, that