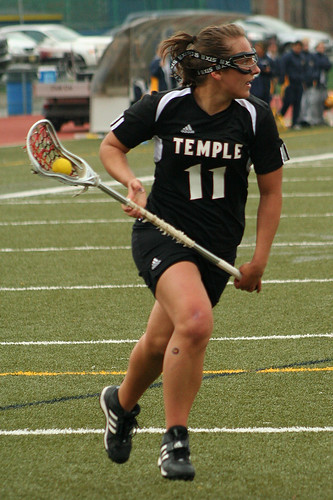 For seniors , the time is now or never.

Prior to their freshman year in 2005, the women’s lacrosse team made four-straight NCAA Tournament appearances. They haven’t been back since.

“What’s been a real joy about both Nicole and Whitney is they really have a passion for the game and for trying to win,” coach Bonnie Rosen said. “I think they have a lot that they’d like to accomplish. They’d like to win the automatic qualifier and go to the NCAAs.”

With a 12-9 win over Massachusetts Sunday, the Owls are off to a 8-3 start overall, with a 4-0 mark in the Atlantic Ten Conference.
And Caniglia and Richards are putting up career numbers in the process.

Both players have already surpassed their previous highs in goals scored. Caniglia ranks second on the team with 22 goals, up from her high of 14 last year, while Richards has put 26 balls in the net to go along with 20 assists, her highest marks since her sophomore season when she recorded 17 and 24, respectively.

“We’ve always played roles, Richards said. “But, I think this year since there’s no one else to fill the other spots, that we had to step up and play different roles.”
Caniglia’s role almost involved a different sport.

In addition to lacrosse, the attacker also played varsity basketball at Radnor High School, earning Honorable Mention All-Central League honors for three years. Instead of playing her home games at Geasey Field, Caniglia very well could have been playing for women’s basketball coach Dawn Staley at the Liacouras Center.

“Basketball’s tough,” Caniglia said. “I love playing basketball, but there are better opportunities for me in lacrosse.”

Opportunities like playing for one of the top 15 high school teams in the nation. In her four years at Radnor, the women’s lacrosse team won the state championship twice, in 2001 and 2003.

“At Radnor, I played with a lot of girls that were very athletic, very good girls,” Caniglia said. “And I feel that I definitely learned a lot from them … Whitney and [her sister] Hillary [Richards] are girls I would’ve played with at Radnor.”

Unlike Caniglia, Whitney’s path to Temple involved only one sport. She started playing lacrosse in sixth grade “because it was the new sport in school” and hasn’t looked back. Her twin sister, Hillary, who also plays midfield, joined her in seventh grade. They’ve been on the same team ever since.

“The only time we weren’t on the same team was when she first started playing lacrosse,” Hillary said. “She was on the team and I wasn’t. One year. And that was weird.”
Outsiders might think that two siblings playing together could cause problems, especially if they are fighting, but Hillary dismisses that theory.

“We have our own ways of handling things on the field, which can be a lot harsher than the way we might interact with Nicole,” Hillary said. “But it’s because we’ve played with each other so long that we just blurt things out and we know it’s just the game.”

“Their relationship is critical to Whitney’s success,” Rosen said. “Hillary is there to push her. She pushes her and she holds her accountable, yet she is always there to defend her. It’s a really neat thing to coach.”

Having coached Temple’s women’s lacrosse team for the past two years after spending 10 seasons at the University of Connecticut, Rosen serves as a first-hand witness to the growth of both players.

“I think probably for Whitney the thing that has changed from last year is that even opposing coaches know that she wants the ball in her hand and that is something you cannot teach,” Rosen said. “The fact that she likes to organize the offense and will take on the burden of how to create something is a huge asset to our game.

“And I think what I respect the most out of Nicole, aside from her explosiveness as a player and her ability to read the game is that she is truly a team player and will do whatever it takes for the team to win.”

If you’re underage and out for a night of drinking, it’s best that you drink to the point of hospitalization so that you won’t be punished by Temple. That’s what Temple’s amnesty clause outlines in

Politics and comedy make their way to Philadelphia this April, searching for the “truthiness” behind funding in a struggling Pennsylvania education system. Stephen Colbert, host of The Colbert Report, will be taping in Philadelphia just