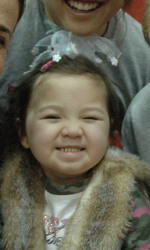 The Temple women’s lacrosse team has a new teammate, but she won’t be seeing any playing time just yet.

In connection with the Friends of Jaclyn Foundation, the Owls have adopted five-year-old Devon Lam as an honorary teammate. The New York-based organization was established to raise awareness of pediatric brain tumors.

The Atlantic Ten Conference is working closely with the foundation to become more involved with its eight teams in supporting and honoring children undergoing and recovering from treatment and surgery. Saint Joseph’s, Massachusetts,
La Salle, Duquesne and Saint Bonaventure all currently have honorary teammates. George Washington and Richmond expect to receive honorary teammates in the near future.

In October 2004, the then 19-month-old Devon was diagnosed with an Anaplastic Ependymoma brain tumor. After six months of intense chemotherapy followed by a stem cell transplant and rescue along with six weeks of conformal therapy and IMRT radiation, Devon is currently in stable condition.

Danny Lam, Devon’s father, said the Friends of Jaclyn Foundation is great for her daughter and she has seen her happier since being with the team.

“She loves the whole team,” Lam said. “She calls them ‘her girls’ and asked the whole weekend when the next time she would see them next.”

The foundation also seems to provide inspiration to the teams themselves. Aside from the athletes focusing on school and lacrosse, they learn about other aspects of life.

“They make time out of her own life to go and see her when
she comes to visit and [it] gives them something to get their minds off of school and lacrosse when they know she is dealing with MRI’s and other treatments,” assistant coach Jennifer Wong said.

Devon and her family travel from New York to watch the Owls play. They were in attendance during the Owls win over No. 14 Penn State last Sunday and had dinner with the team before the game. Afterwards, Devon ran to the girls and gave them hugs.

“She is like our little mascot cheering us on,” senior goalkeeper Bridget McMullan said. The Lam family is aiming to make the trip to California to see the Owls play Saint Mary’s and UC Davis on Thursday and Saturday, respectively.

“Devon is great. She always has a smile on her face, always a positive attitude despite everything.”