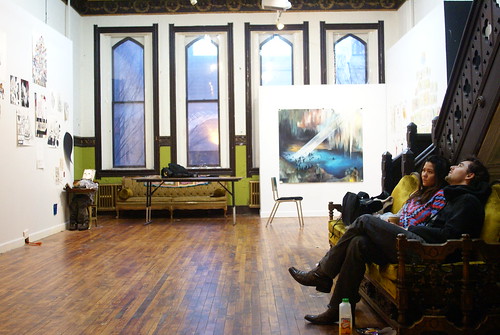 Walking up the creaky flight of stairs into Space 1026’s empire at 1026 Arch St. is like falling backwards into a kaleidoscope.

The front room art gallery is a playful smattering of dreams: here and there on the walls, whimsical characters and creatures come to life in every shade of color imaginable. A chandelier made to look like an overturned octopus hangs from the miles-high ceiling, and a vintage sign – “Sorry, folks, no smoking in this area” – lurks near the top of the stairs, where a perpetually wide-eyed, slack-jawed firefighter gapes down at guests.

Thrift store knick-knacks – a bouquet of plastic roses, an American eagle statuette – sprout from the exposed pipes, along with a few spare doodles on scraps of paper. A long, cavernous hallway packed with boxes, crates and jars of paint leads to some of Space 1026’s studios, where 25 to 30 artists – no one is quite sure – work.

One such artist, 25-year-old Crystal Stokowski, stands at the counter of Store 1026, the space’s latest venture. Heavily patterned handkerchiefs hang like prayer flags above her crown of feathery brown hair, and displayed on the wall behind her are handmade books, T-shirts, buttons and posters. The store is something of an experiment, an opportunity for members of the Space 1026 collective to make some money. After all, life as an artist isn’t easy – which is why many of the people with studios at Space 1026 were originally drawn to the place.

“It’s cheap and it’s a really good environment for working,” Stokowski said. Her studio is a mess of fabric, ribbon and thread, but sewing isn’t all she does – the self-taught artist dabbles in other endeavors.

A high school dropout from Massachusetts who pays rent by touring with her friends’ band, Stokowski has been a part of the Space 1026 collective for more than a year and a half. Working with a community of artists is inspiring on both a creative and an emotional level, she said.

“It’s a great mix of people,” she said with a smile. “Everybody’s really positive and constructive.”

Being at Space 1026 has helped her learn more about screen-printing and also provided opportunities to showcase her work at galleries around Philadelphia and in New York City. In addition, she’s built friendships with other people in the collective. 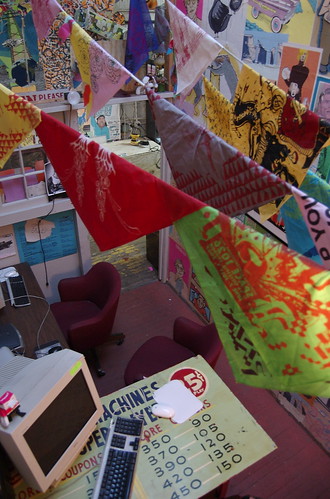 “We hang out and work on stuff together,” she said, shrugging.

When it comes down to it, the mission of Space 1026 is that simple. As Stokowski speaks, other collective members filter in and out of the gallery, store and studios, some at work, others at play. A bearded man wearing a zip-up sweatshirt over a flannel shirt wanders around, his face obscured by a camcorder, ostensibly filming the scene. Meanwhile, Beth Brandon, a petite 25-year-old printmaker from New York, sits at the Store 1026 computer, fiddling with a graphic illustration and occasionally rubbing her tired eyes.

Brandon, who studied at Brown University and also took art classes at the Rhode Island School of Design and Goldsmith College in London, originally came to Philadelphia to apprentice at the Fabric Workshop and Museum, located just down the street from Space 1026. She joined the collective about two years ago and uses her studio space to make books and design patterns for fabric and wallpaper, as well as experiment with other forms of art.

As she sees it, Space 1026 both defies and defines the Philadelphia art scene – it’s unlike any other gallery in the city, but the people who work there embrace the same ideas about art and life as most other Philly-based artists.

“When people choose to live in Philadelphia as opposed to New York or another major city, that, to me, means that they want a place where they can do their own thing, where they can afford to just experiment,” Brandon said. “People make a living doing what they want to do. There’s a lot of printmaking and textile work going on . . . Artists make books and clothes and things that can be used.”

This is evident in Space 1026’s cluttered main floor hallway, the walls of which are lined with a colorful tapestry of posters for concerts, DJ nights and club events, all designed by the collective’s artists. It is also evident in Store 1026, which mostly sells items with practical value. The members of the collective try not to limit themselves in terms of what they do with their art – commercial work is valued just as highly as non-commercial work.

In fact, Andrew Jeffrey Wright, one of Space 1026’s founders, wears a brown, hooded sweatshirt covered with buttons that he made – some of them purely as accessories, others as miniature billboards for underground Philly hip-hop artist Spank Rock and dirty-mouthed rap group Plastic Little.

Wright, 37, attended the University of the Arts for animation, but, like Stokowski and Brandon, keeps his fingers in many pies. The Philadelphia native considers himself an animator, filmmaker, painter, dancer and photographer, and said he doesn’t get out much. 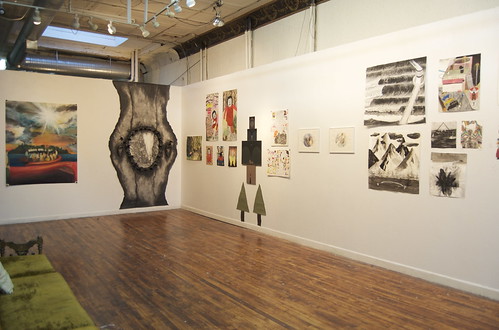 Wright and a handful of others founded Space 1026 in November of 1997, inspired by similar art collectives in Providence, R.I., and New York City. Since its inception, Space 1026 has been a force to be reckoned with, hosting First Friday events, themed parties and gallery exhibits. Its artists, meanwhile, have created some of Philadelphia’s most interesting and unique works.

Only recently, however, has the space begun to receive the attention it has long deserved. These days, Space 1026 is known not just within Philadelphia limits, but around the country as well. On Valentine’s Day, the collective gave a presentation on collaborative screen-printing at New York’s Museum of Modern Art, and, on March 7, Brooklyn’s famous Cinders Gallery will curate a show at Space 1026.

“It’s like a clubhouse and an art school, only without the school part,” Wright said. “If you want input from somebody, you have it. If you don’t want it, you usually won’t get it. Unfortunately, sometimes you will get it when you don’t want it . . . I mean, it’s a group of 25 to 30 artists, not everybody’s best friends. But everybody seems to be able to work together. A lot of people would rather be here than alone in a studio in South Philly or wherever.” 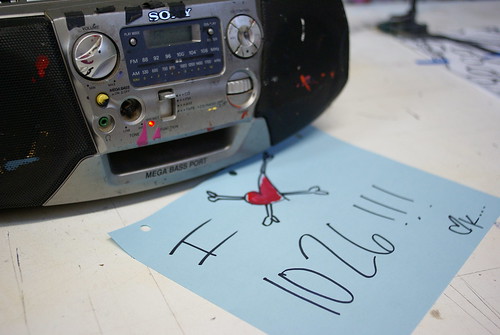