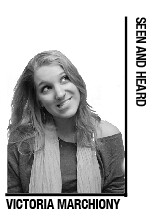 Columnist Victoria Marchiony discusses the smells emitted from the blooming trees on 13th Street and Cecil B. Moore Avenue.

Ah, springtime. The weather is warm, the clouds are thin and the hemlines are rising. On one of the first hot days of the season, I walked out of my residence hall and paused to take a deep, indulgent breath.

The air only got about halfway up my nostrils before my brain registered the heinous scent it was being subjected to and immediately started rejecting it. Mid-inhale, I found myself spluttering, choking, gagging on the familiar odor that has sadly become synonymous with springtime to my poor, victimized nose.

In the event that you’ve been spared an encounter with the south side of Main Campus where the smell to which I’m referring lives and you’re lost, the aroma I’m talking about is frighteningly similar to one found elsewhere in nature – though it is usually reserved for the insides of tube socks or condoms.

Now what on 13th Street and Cecil B. Moore Avenue could possibly smell so strongly reminiscent of male ejaculate? The culprit, amusingly enough, is a tree with small white flowers which when in bloom, put that pungent zing in the air.

To the scientific community, the offending trees are known as “Pyrus calleryana.” To the gardening-inclined, they are more likely to be referred to as “Chanticleers” or “Callery Pears.” To everyone else, they go by a series of colorful nicknames that I can’t get away with printing – “Spring-Has-Come Trees” being the most acceptable.

Originally brought over from China in the 19th century by a French missionary, Callery Pears have become exceedingly popular in landscape architecture.

Interestingly, of all the websites Google produced in response to the keywords “Pyrus calleryana,” not a single one mentioned that those pretty white flowers they were raving about emit an unbearable stench from April through August. Web pages were packed with scientific information about origin, height, shape, watering and fertilization needs and plenty of bragging about the species’ award for being named “Urban Tree of the Year” in 2005. In fact, the only website that mentioned the signature fragrance of the trees was UrbanDictionary – needless to say, they didn’t exactly tread lightly.

This means that while I now know a great deal about the benefits of its shape, and have gathered that the smell is normal, and not indicative of anything “wrong” with the tree, I still don’t understand why they reek.

Though it’s nice to be able to call my friend in Columbia, Md., and commiserate about our parallel experiences of asphyxiation, I never “got” who in their right mind would allow these things to be planted in multiple cities. Even beyond Philadelphia and its surrounding suburbs, these trees are main features of urban landscaping all around the U.S., and are increasing in popularity in Australia. The gaping black hole in the details available about the smell online finally helped me shed some light on how these disgusting plants ended up everywhere.

I have a sneaking suspicion that it all comes down to the evasive sales pitch: If nobody asks about how the tree smells, then all of the positive qualities can persuade city planners to unknowingly buy into the perpetuation of grossness.

For me, the tree problem drives home the importance of full disclosure. Even if you aren’t asked, or you fail to ask someone else a specific question, there are certain topics that should be on the table for the sake of general wellbeing. Whether it’s giving a potential sexual partner notice that you have a sexually transmitted disease, disclosing to a raging liberal that you’re a republican or letting your doctor know that you smoke before letting her prescribe you medication for a chronically irritated throat, I think it’s pretty obvious that integrity should not be taken lightly.

I’m consistently disappointed by how little honesty I hear on topics ranging in importance from life and deadly side effects of certain chemicals to the vile odor of a tree planted outside my window. Telling uncomfortable truths may be momentarily awkward, but the consequences of whatever fleeting trouble it conjures certainly have to be miniscule in comparison with the chain reaction of unpleasantness that may follow if you ignore those nagging details.

The moral of my rant? Don’t withhold information, because it may result in a nostril-crippling epidemic of foul-smelling trees that everyone with a working nose will hate you for each year.

Happy springtime, Temple. Enjoy your Rita’s Italian Ice and sunshine. And don’t forget to keep breathing through your mouth until the fall.

Victoria Marchiony can be reached at vmarchiony@temple.edu.