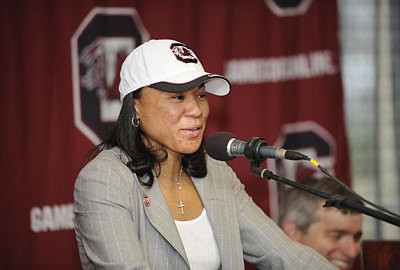 “We were looking for a gem and we found a bright diamond right in our own backyard.”
– Former Temple Athletic Director Dave O’Brien after hiring Dawn Staley as Temple’s women’s basketball coach on April 20, 2000.

The diamond is gone.

The 38-year-old Philadelphia native and former WNBA all-star is the winningest coach in Temple women’s basketball history, amassing a 172-80 record in eight seasons with the Owls.  She signed a six-year contract extension with Temple last year and earned $500,000 this season.
Staley agreed to a five-year deal with South Carolina — which includes a $500,000 buyout — with a base salary of $250,000 and a total package reaching $650,000 per year, according to the Philadelphia Inquirer.

She will take over a team that went 16-16 overall and 4-10 in the Southeastern Conference last year under former coach Susan Walvius, who resigned last month.
“My vision is to bring national prominence to South Carolina,” Staley said Saturday in a press conference in Columbia, S.C. The Gamecocks, who have made trips to the WNIT the past three seasons, last made the NCAA Tournament in 2003 and advanced to the Elite Eight in 2002.
“It’s a bold move,” Staley said, “but challenges are things that drive me.”

At Temple, the Dobbins Tech High graduate took on a challenge when she inherited a program that suffered through a decade of losing campaigns before she arrived in 2000.

Staley, who had no previous coaching experience when she took the job, quickly turned things around, leading the Owls to six NCAA Tournament appearances and four Atlantic Ten Conference Championship wins, including three consecutive league titles between 2004 and 2006.

This year, the Owls finished 21-13 overall and 12-2 in the A-10, losing to Arizona State in the first round of the NCAA Tournament.
Despite fielding six 20-or-more-win teams including a program record 28-win squad in 2004-2005, Staley’s Owls never advanced past the second round of the NCAAs during her tenure.

Now, Staley, perhaps the greatest Philadelphia-born women’s basketball player ever, is leaving her backyard for a new home.

“It was a very difficult decision but sometimes things happen,” Staley said. “I think professionally I like to be challenged just to reassure myself as a coach. I thank Temple University for giving me the opportunity to hone my skills as a coach. This opportunity fits me.”

“Dawn Staley has had a strong record at Temple University,” Temple Director of Athletics Bill Bradshaw said in a statement. “We wish her the best at South Carolina.”

The Virginia University graduate played for the WNBA’s Charlotte Sting for six full seasons before finishing out her professional career with a short stint with the Houston Comets in 2005.

In the SEC, Staley’s Gamecocks will play against powerhouse programs like the reigning national champion Tennessee Lady Vols, Lousiana State and Georgia on a yearly basis.

While Staley prepares to face some of the top teams in the country, the Owls will conduct a national search to find a new coach. The hunt to find Staley’s successor is slated to begin this week, Bradshaw told the Inquirer Friday.

Potential candidates include Patty Coyle, coach of the WNBA’s New York Liberty and a West Catholic High graduate, and young assistants from nationally ranked teams such as Jamelle Elliott or Tonya Cardoza of Connecticut or Carlene Mitchell of Rutgers, Inquirer women’s basketball writer Mel Greenberg reported Friday.
The Owls may also target a high-profile coach from another college, Greenberg wrote.

“What is most important is we go from the great work Dawn did at Temple and find the right bridge to take us to the future,” Bradshaw told the Inquirer.

Summer sessions to begin next week

Students enrolled in summer courses will get a brief break and then head straight back to the classroom from May to July. The first summer session begins only five days after the last date of

Temple is more than Chaney and Cosby

I searched the Princeton Review and simply could not find a single list that ranked a school based on the acts of one of its basketball coaches and an alumnus. Why is that? It doesn’t