CHARLESTON, S.C.— Though sloppy at times, the men’s basketball team did what it had to do.

Behind 26 points from senior guard Dionte Christmas and 14 points and 15 rebounds from sophomore forward Lavoy Allen, the Owls cruised to a 79-65 season opening win over East Tennessee State Friday afternoon in the Charleston Classic at Carolina First Arena. 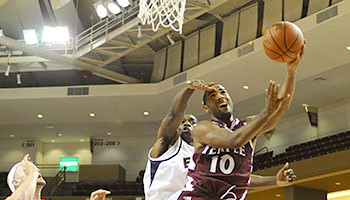 The game itself was never really in doubt, as the Cherry and White had an eight-point lead just over five minutes into the game. That lead sailed to as large as 20, as the Owls went on a 12-0 run in the middle of the first half, thanks in large part to Christmas sinking two of his five 3-pointers in that stretch.

Also helping out was junior guard Ryan Brooks, who added 15 points in 30 minutes of action.

So, with that, the Owls’ captain was quite pleased with his team’s performance.

“Oh, definitely [it was impressive],” he said. “It was definitely a great debut for us. I’m proud of my team…we got the job done today.”

So was his coach.

“When you’re away from home, if you can get a win, that’s a good thing to start the season with,” Fran Dunphy said.

The Owls’ largest lead was 24, which came midway through the second half on a layup by Christmas. But the Buccaneers didn’t go away quietly, cutting the lead to as little as nine with 3:30 to go in the game.

However, Temple was able to hold on, as they didn’t allow a single East Tennessee State point the rest of the way.

Still, the sloppy play, which included 18 turnovers and plenty of missed free-throws down the stretch, caught the eye of Dunphy.

“It’s just attention to detail,” he said. “There was one loose ball that we were trying to dribble, and we only say that 100 times in practice, just pick it up. We did some foolish things, but again, I would attribute a little bit of that to the first game.”

The person in charge of running the show is junior guard Luis Guzman, who played 36 minutes and finished with five assists and three turnovers.

Senior guard Semaj Inge also filled in at point guard, as he connected for six assists and six points in the effort.

But Allen, who moved up to the being the No. 2 scoring option this season, was the real breakout star of the game.

His 10 defensive rebounds paced an undersized Owls squad, one that was missing senior center Sergio Olmos to a sprained right ankle.

Still Allen had no problems down low, as things seem to be coming easier to him now that he’s in his second year of collegiate basketball.

“Yea, a little bit,” he said. “I feel much more experienced having 33 games on my belt already.”

“[It] gave them a sense for what they were going to do, and they both gave us some positive minutes out there,” Dunphy said.

The Owls return to action Saturday afternoon at 2 p.m. against the winner of the College of Charleston/Southern Illinois Edwardsville contest.

Olmos was in a cast and walking with crutches. Dunphy didn’t really have much of an update on his status…Sophomore guard Martavis Kee, who reportedly will transfer at the end of the semester, was not on the bench for the game…Sophomore forward Craig Williams played two minutes in the first half and even hit a three-pointer.

Basketball misses out on Big East, football pledges to be “great” in The American.