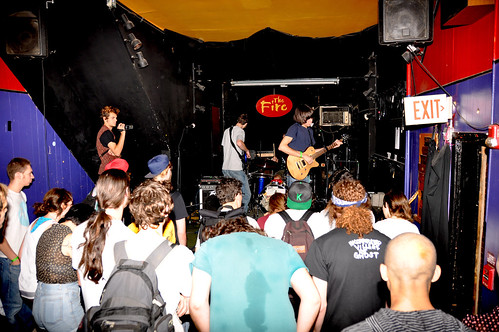 Sweaty fans stand shoulder to shoulder, attention fixed upon members of The Skin Cells. Bassist Colin Acchione, a junior at West Chester, stands with his back to the audience as his brother Sam Acchione, a freshman at Temple plays the drums. Dark hair hangs over freshman singer and guitar player Alex Giannascoli’s eyes.

The Skin Cells grew up in the Philadelphia suburb of Havertown, Pa. and became friends in middle school. After becoming a Havertown favorite during high school, the band began playing house shows around Main Campus.

“I used to steal [Acchione’s] lunch in sixth grade and we would fight about it,” Giannascoli said. “Then I found out he played guitar and gave him a tape of me playing drums and he said I was fine and we agreed to start a band.”

Each member of The Skin Cells plays multiple instruments.

In March 2010, The Skin Cells opened for Philadelphia band Man Man at the Trocadero. In addition to Pennsylvania, the band has played shows in Maryland, Virginia and New Jersey. They appeared at The Fire on Girard Avenue last month.

“It’s cool to play at a place where they actually do a soundcheck,” said Giannascoli about playing at The Fire as apposed to student basements. “The sound quality was so good.”

The weekend after The Fire, The Skin Cells returned to basement shows. The band plays several times a month with other Philadelphia student bands including Stinky Smelly, Old People, Nona and The Hundred Acre Woods.

Abi Reimold can be reached at abigail.reimold@temple.edu.

In response to the predictable 1990s electronic bands, German duo Walter Merziger and Arno Kammermeier began mixing their own music, which eventually turned into their current band, Booka Shade. The two friends grew up together

Influenced by hardcore punk acts like Fugazi and modern rock groups like The Jam, Ted Leo and the Pharmacists produce songs about modern warfare (“Bomb. Repeat. Bomb.”), eating disorders (“Me and Mia”) and the demise of the third-wave ska movement (“Where Have All The Rude Boys Gone?”).