Whoever has written off the Millennials as a lost generation of heavily medicated, Wiimote-wielding miscreants who waste their afternoons watching themselves do keg stands on YouTube, never met any of the members of City Year.

In preparation for the MLK Day of Service at Kensington International Business High School, groups of young people are running around painting posters, scrubbing walls, lugging ladders and administering coats of primer. All of them sport the signature red City Year jacket, along with an air of purpose and an easy smile.

“College students today have a more philanthropic mind-set. They get out of school and want to do something to change the world,” said Jamie Wilcoxson, admissions manager for City Year Greater Philadelphia.

That explains the altruistic flood into the City Year applicant pool.

“Applications are up 300 percent nationally over the past year and something like 435 percent in Philadelphia,” Wilcoxson said.

The organization sprouted up two decades ago in Boston as an arm of AmeriCorps. It now boasts 18 sites domestically, from Chicago to Los Angeles to New York City. They added a site in South Africa in 2005.

The team-based program recruits a diverse swath of 17- to 24-year-olds to dedicate 10 months of full-time service at any one of its many sites across the nation.

While programs might be structured differently depending on the location and the initiative (homelessness, AIDS, education), they all have the same mission: to inspire and support citizen service across the globe to unite people from all backgrounds in building a more just world.

“You know when you show up in your City Year uniform, you’re going to be making a difference,” said Ian Rees, a third-year staff member.

City Year Greater Philadelphia conducts a high school initiative, in which 225 corps members are dispersed throughout area schools to try to improve their ABCs: poor Attendance, poor Behavior, and Class failure in math, English or science.

A Johns Hopkins University study identified these as prime indicators of children who are “off-track.” The presence of any one of those conditions increases the risk of dropout by 50 percent. City Year’s goal is to address those indicators and boost students’ chances of graduating and moving on to higher education.

Valerie Braman, a teacher at Kensington and school liaison, has found that the presence of corps members has done more than raise grades.

“Sometimes they can reach students in ways that teachers and staff can’t,” she said.

Seeing red jackets in the halls and fliers for events like fashion shows and job fairs encourages teens to become more involved in their classes and their communities.

In financially troublesome schools like Kensington, staffing is often an issue.

Sophomore Tarija Allen complained that there was no regular music teacher.

“We have a different one every week,” she said.

In situations like these, corps members will come into the classroom with planned activities, not only providing educational opportunities but also showing students that someone cares.

“A few years ago, we took a look at our brand and found that City Year has very low brand recognition among our demographic,” Rees said. “Since then, we’ve been on a campaign that formally kicked off Jan. 12 at the Comcast Center. [Comcast] will be airing $15 million worth of City Year PSAs over the next few years to help raise brand recognition.”

Although most people are aware of the importance of community service and its inclusion into most high schools’ curricula, it will soon be front-and-center in the minds of the public. 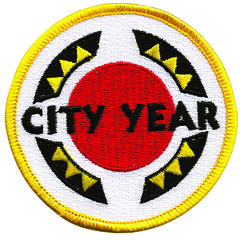 Unfortunately, the end of the school year inevitably brings a separation that can be difficult for students and corps members alike.

“The one thing I don’t like about City Year is that you get attached to people and then they transfer. They just take them away, and you’ll probably never see them again,” said Kensington sophomore Yvonne Hughs.

While that may be true, just forging those relationships and touching someone’s life for a period of time is bound to have a positive effect.

“If you’re sick for a day and you aren’t in your class, somebody’s world is going to be affected,” Rees said.

For those who cannot devote 10 months, City Year provides other opportunities. Events are facilitated by corps members who assign tasks and manage groups of volunteers.

At Kensington International Business High School, corps members have posted Pennsylvania System of School Assessment staples such as “onomatopoeia” on panels around the halls to stress the importance of expanding students’ vocabularies.

Sen. Bob Casey dropped in during a lunch break to offer encouragement to City Year during last week’s MLK Day of Service.

“Thank you for your contribution. We need you now more than ever,” he said.

After his speech, instead of gathering around and fawning over the VIP, most volunteers hurried back to work.

While an entire 10 months of service may seem daunting for those still nursing carpal tunnel from logging too many hours on Second Life, a commitment like MLK Day is a good place to start.

Many corps members have similar stories: they were facing graduation with no clear career path, and City Year popped up on their radars via a flyer or news article.

While it may begin as an abstract “I want to help the world” or a whimsical and scared college grad “I don’t know what I’m going to do, so I’ll do this,” the rewards are definitely concrete.

Volunteers walk away with new leadership skills and leave behind healthier schools and neighborhoods, which are way more impressive than listening to crummy band recordings on MySpace.

Maureen Coulter can be reached at mareen.coulter@temple.edu.

Eliminating the AmeriCorps program will most hurt the communities it serves. You see them on the train, in public schools and walking around neighborhoods in Philadelphia. They don a uniform of tan construction boots, khaki

From the ground up