The continents exploded in a sea of fabric and jewels inside Temple’s Performing Arts Center during the World’s Runway, hosted by the Progressive NAACP and Dynasty Entertainment. 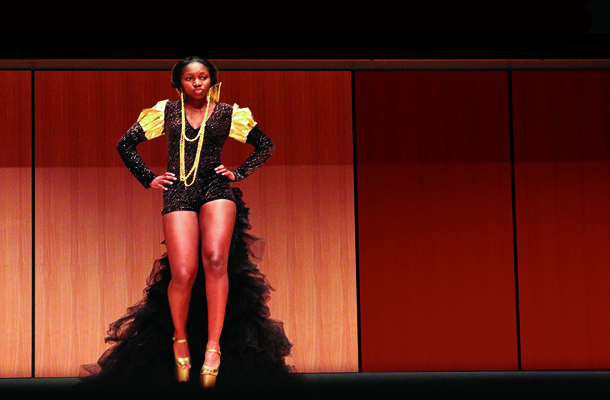 Models of all heights, races and body types graced the runway in fashions representing Asia, Europe and both Americas.

A slideshow represented the different cultures of each continent that coupled with cultural music, which played as backdrops for the models.

Coordinators of the event, Setia Koromo, the president of Progressive National Association for the Advancement of Colored People, and Antoine Owens-Davis, the president of Dynasty Entertainment, a modeling organization, didn’t put on the typical fashion show.

The event’s Facebook page said the World’s Runway, “is a fashion and talent showcase.With this program we hope to display the essence of Temple, which is the vast diversity amongst the student body,”

This event communicated that message through the fashion and performances featured.

“It’s a good show. I came out to support my girlfriend who’s apart of Dynasty,” said sophomore advertising major Luis Padilla. “It’s not the typical fashion show. [There are] a lot of different acts going on that keeping you guessing.”

Student organizations, such as TU Banghra, Alpha Sigma Rho Sorority, Inc., the Temple Irish dance team, the Organization of African Students dance team, the Ladies of Elegance Step Organization and many others graced the stage to culturally represent the diversity Temple prides itself on.

“You hear that Temple is a diverse school, and then you come to an event like this and actually see that there are a lot of different cultures on this campus,” Ariel Terry, a sophomore kinesiology major, said.

Websites, such as collegeprowler.com, have rated Temple at the top when it comes to diversity.

“I could’ve attended Howard University, a [historically black colleges and university], but since my high school was predominantly black, I decided to go where I could see different faces because the real world is full of different faces,” Terry said.

It’s easy to forget the level of diversity there is on Main Campus because it is human nature to stick with the same crowd of people. Events, such as these, remind us of all the different cultures that can be experienced.

TU Banghra, who performed traditional Bollywood-style Indian dance, was a crowd favorite. Although missing from this event, members usually dress in traditional Indian garbs, dance to modern, cultural songs and play to the crowd.

The coordinators of this event took great care to represent the different cultural aspects that are right on Main Campus, as well as other talents, such as rap artists Fese and David Aime.

“Diversity is important because when you enter the world, you’re surrounded by white, black, Asian, you name it,” Cynquetta Barnett, a senior accounting major and the president of Ladies of Elegance Step Organization, said. “It’s important to be a part of events like this because you want to be able to expose others who may not know what stepping is, for instance, and give them a really good performance for them to want to learn more. Diversity promotes learning in my eyes, and the diversity on campus, in organizations [and in] the staff … continues to promote that type of learning.”

As the scenes transitioned, Temple’s DJ Yogi Bear played popular songs to keep the energy flowing throughout the show.

The show advertised many talented students and also gave North Philadelphia high school students a chance to strut their stuff in their own clothing designs during the North America segment. Despite their young age, these teens meshed well with the other students ripping up the runway in heels.

“When I was that age, it was flats and sneakers, and yet she’s on that slippery stage in pumps,” Terry said of a young model.

Many of the models were not all a part of Dynasty Entertainment.

“I’m a part of NAACP, but I’ve always thought about modeling and had fun,” sophomore accounting major Courtney Graves said. “It’s a different type of showcase and [I] thought that the designs and everyone involved was great and held true to the mission of the show.”