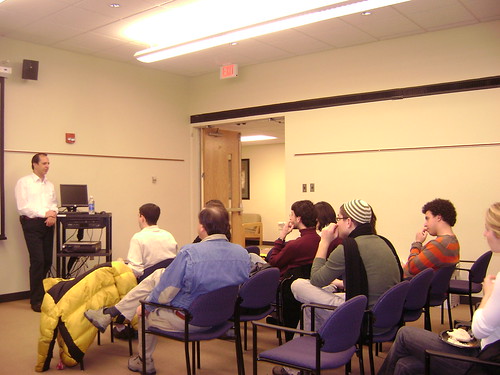 As an Israeli reporter for the Jewish newspaper the Jerusalem Post, a pro-Israel position is a standard position to take. But as a Palestinian Arab born in the West Bank, Khaled Abu Toameh’s argument deviates from the norm.

“If I was Israel, I would not give away one inch,” Toameh said.

The Middle Eastern journalist, whose father is an Israeli Arab and whose mother is a Palestinian Arab, spoke Sunday at the Howard Gittis Student Center about his views on the Israeli-Palestinian conflict. Temple Students for Israel hosted the event, which 12 people attended.

Toameh serves as the West Bank and Gaza correspondent for the Jerusalem Post and U.S. News and World Report, and produces specials on Palestinian affairs for NBC News. He opts to work for a Jewish newspaper as an Arab because it does not support censorship, unlike other media outlets in his area.

“I can express myself freely at this paper. We don’t have a similar free medium in the Palestinian area,” he said.

Toameh’s speech criticized the Palestinian Liberation Organization, provided insights into the views of an ordinary “Palestinian on the street,” and argued that a quick monetary solution to a decades-old crisis was ineffective.

The political organizations Hamas and Fatah vie for control of the PLO, which the United Nations considers to be the official representative of the Palestinian people. But both factions are corrupt and most Palestinians desire a regime change, Toameh said.
“This is a power struggle of the bad guys versus the bad guys. And yet the United States brings the PLO to Annapolis to represent the Palestinians,” he said. “How are they going to enforce the agreements made there when they can’t enter Gaza?”

Toameh said Yasser Arafat, founder of the Fatah and former Palestinian president, utilized foreign aid and other funds to support his wife’s shopping sprees and build “casinos instead of hospitals.”

“When money is given, people need to hold the benefactors accountable,” he said. “They should ask, ‘Where are the hospitals? Where are the schools? Where is the free media?’”

“I’m Jewish and I’m pro-Israel, but to hear that Israel should not surrender land from another viewpoint and from someone who is living in the area was encouraging,” Breitbart said.

Holly Otterbein can be reached at holly.otterbein@temple.edu.