Students in Yorktown received an October surprise last week, but it had nothing to do with the election or the Phillies’ playoff outlook. It was much simpler: get out. 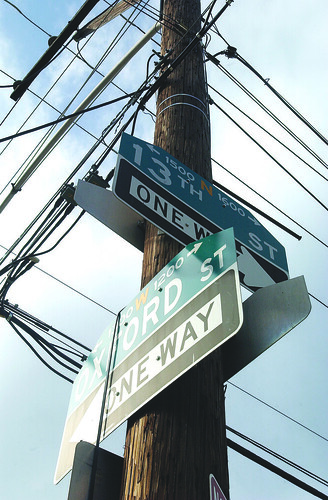 L&I has sent notices of eviction to some students in Yorktown (Julia Wilkinson/TTN).

Many Temple students living in Yorktown received notices stating they would be evicted in December, once the academic semester is completed. The issue is a zoning ordinance, which makes it illegal for students to rent properties if there are more than three unrelated tenants and if their landlord does not live with them.

Some students have already been warned about the possibility of being evicted. The Department of Licenses and Inspections has been inspecting houses in Yorktown to issue notices to those in violation of the ordinance.

The university has not contacted landlords illegally renting units to students.

“It’s really important for these students to be talking to their landlords,” said Ray Betzner, director of University Communications.

If students do find themselves without a home, Temple will help them, Betzner said.

“If students come to us with no place to live, we try to help them find a place to live,” Betzner said.
Currently, students are searching for new housing due to the evictions.

“The first letter we got was about how we are breaking the zoning code,” Ed Palumbo said.

Palumbo, a junior sport and recreation management major, said his landlord told him not to worry because he receives notices from L&I every year.

Palumbo and his roommates, who live on Betsy Ross Place, received a letter last week warning them that if changes are not made by Dec. 19, they would be evicted.

“Temple should be working with L&I and looking at rezoning this area,” Palumbo said. “I think Temple should fight. I don’t know what they could do, but I think they should fight to keep us here.”

Palumbo said he felt fortunate to live in such a safe neighborhood so close to Temple.

“We’re not here to ruin the neighborhood, we’re just here because it’s safe and we need a place to stay,” Palumbo said.

Some students have yet to receive eviction notices.

“They didn’t ask about anything, they just checked locks and asked if we had separate leases,” Ramsey said. “We never got anything.”

Some longtime residents said they have problems with the students, but that they didn’t think eviction was the answer.

“My biggest problem is the parking,” Bobby Scott said.

Scott, who lives on the 1200 block of West Oxford Street, said students will either run over or move cones set in parking spots.

He added that Temple should provide more parking for the students.

“Temple should put it in their tuition and give them parking. Give them a discount,” Cook said. “Give them a price where they could afford to park.”

Scott said he didn’t feel the students should be evicted.

“Why? If they’re not destroying things, let them live here,” Scott said.

He also said many of the problems come from Jefferson Manor, which sits southeast of Yorktown.
“That’s where you get most of the complaints.”

Palumbo said he can understand the frustration longtime residents have, but doesn’t think students should have to leave.

“I understand the neighbors would not be happy, but [these are] changing times.”

Residents who live near Main Campus and alums of a school slated to become apartments have strong opinions about it.

Residents in some of Temple’s surrounding neighborhoods came together in a meeting to discuss the issue of students illegally living off campus.