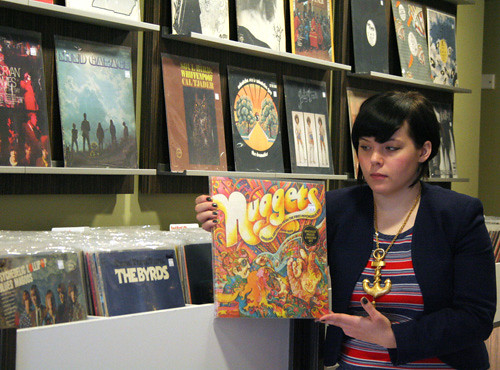 Until recently, life was difficult for Philadelphians with an affinity for vintage. But despair no more: a new store on East Passyunk Avenue in South Philadelphia caters to the quirky whims of people who fancy the antiquated.
Sweet Jane Vintage Clothing and Vinyl opened last December. Although young, the store’s unique offering of the stylishly outdated shows promise for its future.

Owners Mike Trombley and Jen Zimmerman were good friends for several years before they decided to pursue a business together. Though similar stores can be found in London and New York, Trombley doesn’t recall a similar store ever opening in Philly.

The store sells vintage clothing, jewelry and shoes, as well as records.
“All things rare and beautiful,” its MySpace page boasts.

When Zimmerman first mentioned the idea to Trombley, she was already operating a Sweet Jane store in an antiques mall off of South Street. But the space was too small and she was looking for a new location. At the time, Trombley was working in a record store down the street from Zimmerman’s shop.

“It just seemed like a natural partnership,” he said. “The records and clothes complement each other.”

The store, although small, hosts several racks of sweaters, blouses and bottoms accentuated by shelves of shoes. Though visibly geared to female customers, there is a selection of men’s clothing as well.

The records are shelved on the opposite wall. Some are hung, but most sit in box-like shelves that customers thumb through. Trombley has several record players sitting throughout the store, which play various selections from the store’s stock.

“A lot of the records are from my own personal collection,” he said. “Funk and soul really get me, but we have everything from indie rock to pop to psychedelic.”

Trombley admitted that the low rent attracted him to the area, but he said he also feels that the avenue has social benefits for both the customers and owners. East Passyunk Avenue’s friendly atmosphere allows curious browsers to peruse at ease.

“What’s great is that guys and girls can shop here together. Guys can browse the records while girls try on clothes, and vice versa,” Trombley said.

Zimmerman and Trombley signed a lease for the property in September, but spent nearly two months gutting it. They installed new sub-floors, added dressing rooms to the back and commissioned custom pictures before they set up shop.
Sweet Jane attracts a mainly younger crowd, but Trombley has seen all types walk through the door in the store’s first months.

“It’s mostly a hipster crowd,” he said. “But I’m also seeing these seriously old-school South Philadelphians come in to look around. It’s really cool to see how supportive they are.”

“They’re my two favorite things – records and clothing,” Trombley said. “I think a lot of people can relate to that.”

Mary Elizabeth Coyle can be reached at mary.coyle@temple.edu.