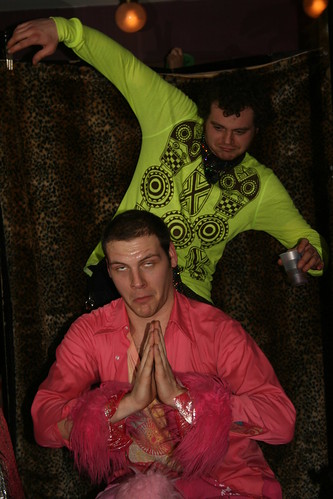 The Labold brothers are making a mark in the underground art community in Philadelphia. Greg and James Labold have dedicated themselves to creating fashionable, innovative and multifaceted art together for the past two years.

Greg, 25, and James, 27, both graduated from Temple with degrees in print-making and glass-blowing, respectively. Perhaps their academic background explains how the Labold brothers were able to turn $150, a unique vision and a garage full of T-shirts and printing supplies into a self-sufficient in such a short amount of time. The clothing is now available at laboldbrothers.com.

The brothers got the idea of printing T-shirts to make their work seen because it is easier to sell clothing than art, Greg said. People need clothing, but don’t ne cessarily need a painting.

“Originally, we started making work [by] taking images from art work that we already made, like photographs or sculptures,” James said. “Then we took these independent bodies of work and combined them and collaged them together and printed them together.”

The Labold brothers have taken an all-encompassing direction with their newer material. Their newest line of fashion-art is called Extraboriginal, which is a combination of the words “extraterrestrial” and “aboriginal.” Extraboriginal is the first body of work that the two brothers planned out and collaborated on from the beginning, James said.

Their Extraboriginal style uses cultural icons and symbols for inspiration, Greg said. It is a balance of order and chaos stemming from the contrast in Greg and James’ creative processes.

“My brother and I, although we’ve been influencing each other, [James] developed in a more three-dimensional sculpture art [style],” Greg said. “I came from more illustrative, two-dimensional, cartoony stuff, so I’m the print-making, drawing and illustrations guy and James is the glass blower, sculptor and builder.”

James said the creative process is like a classic sibling rivalry that encourages them to tap into each other’s strengths.

“Greg is more spontaneous and sort of intuitive. My work tends to be more planned out,” James said. “It has partially to do with maybe our personalities but also the difference of materials that we are trained in. I’ve always been doing sculpture but generally with three-dimensionals you have to plan more. Once you cut a piece of wood, you can’t really change that.”

A trait that both brothers share is their resourcefulness. The Labold brothers use thrift stores for inspiration and thus have an eye for turning unlikely objects like trash, stuffed animals and articles from the “women’s section” into stylish works of art for Extraboriginal.

“We get some funny looks, especially since Greg’s been buying a lot of stuffed animals from the toy store for Extraboriginal,” James said. “When people see some bigger guy buying a shopping cart full of stuffed animals, they look at us funny and may be a little intimated to say something, but they generally think that we are a little insane or creepy or maybe both.”

Greg said that he and his brother were inspired by cultures like the Bwa tribe in Africa and extraterrestrial beings from the future to create a performance art extravaganza.

“We took a prehistoric sort of a caveman, aboriginal, native, and this idea of a futuristic, extraterrestrial life-form coming to earth, and the two of them either interacting and influencing each other or even having similar traits,” Greg said.

“It’s definitely a treat for all of the senses,” said Darrel Asbury, 32, of Passyunk. Asbury is a veteran Philly disc jockey who provided the dance-track at what was in many ways a coming-out party for the Labold brothers last Friday at Vesuvio’s in South Philadelphia. During the event, the Labold brothers showcased their Extraboriginal line of clothing and performance art in a runway show.

The show was marked by models, an imaginative style and a lot of hip swaying to the beat. It was the first Labold brothers event to be covered by citypaper and other news outlets in Philadelphia.

The Labold brothers envisioned a whole culture for their Extraboriginal line, and James said they will incorporate more elements of creativity for an art movement that appeals to all senses in the near future.

The Labold brothers have gotten little press coverage, but they’ve had success promoting on the Internet through MySpace and the popular blog Philebrity.com.

“We’ll see people [that we don’t know] on the street wearing our shirts,” Greg said.