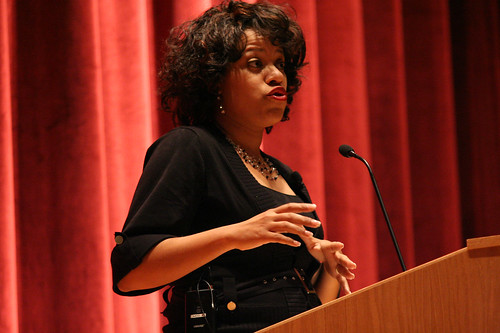 AMBLER — Francine Lucas-Sinclair spent part of her childhood being raised by her grandparents, while her parents served time in prison. She is the daughter of Frank Lucas, the drug lord depicted in the 2007 film American Gangster, starring Denzel Washington and Russell Crowe.

Through her experiences as a child with an incarcerated parent, Sinclair was led to establish Yellow Brick Roads, a program that helps children with parents in prison. On Feb. 19 at the Ambler Campus, Lucas-Sinclair presented, “My Father: The American Gangster,” an insight into her life as a child and how it led up to the birth of a new organization for children like herself.

“My father built a heroin pipeline from Southeast Asia to New York and paid soldiers in Asia to smuggle drugs over here and sold it for cheap. My dad looked at this as a business opportunity at the time,” Lucas-Sinclair said.

During the era of the Vietnam War, soldiers used drugs in Vietnam and eventually became addicted to it, Sinclair said. Lucas made $1 million a day from his business.

“We lived in New Jersey where [there] are beautiful houses, picket fences, [and] manicured lawns, but we lived a normal life,” Lucas-Sinclair said. “We took exotic trips, but it wasn’t like people think that he spent enormous amounts of money on extravagant things. Our house was always cheerful – it had lots of friends and family.”

Even with her enjoyable childhood, Lucas-Sinclair was too young to understand what he father did for a living.
“As a little girl, I had a loving father and loving mother, all the toys I could ever want, but what I didn’t know what my dad was doing,” she said. “When you’re living on borrowed time, sooner or later it’s going to catch up to you. We were living at the expense of others.“

In 1975, Lucas went down with his business at the end of the war. Lucas-Sinclair was three years old when her father was arrested for drugs.

“The federal authorities came charging into our house,” she said. “I do remember that it was like a stampede of people coming through the door. I remember just screaming, and there was a lot of screaming in our house. I remember being thrown on the floor. It was traumatizing.”

After the arrest, life for Lucas-Sinclair was different.

She visited her dad every day in jail but didn’t understand where he was. Sometimes she believed he was in a fish tank when she talked to him through glass, she said. For her, it was a very confusing time. Her father was sentenced to 70 years in prison, and his family was placed in the witness protection program and moved to Albuquerque, N.M.

After living in New Mexico for three years and not growing accustomed to the lifestyle, they got out of the witness protection program and moved to San Juan, Puerto Rico, with Lucas-Sinclair’s grandparents.

Frank Lucas was released from prison within six years and had a difficult time obtaining work. Lucas went back to the drug business and was caught a second time, but this time, his wife was also involved. He went back for eight years, while his wife went for five years. Lucas-Sinclair went back to San Juan to live with her grandparents.

“They taught me that I have to determine what my life would be,” Lucas-Sinclair said.

When released, her mother enrolled Lucas-Sinclair in the girl scouts.

“I had to take responsibility for my actions. I couldn’t act up,” Lucas-Sinclair said.

Her parents taught Lucas-Sinclair that their choices did not have to determine her choices. From her experiences as a child with incarcerated parents, she decided to start Yellow Brick Roads, formed to help children who, like herself, who have incarcerated parents.

“I think it’s an excellent program,” said Michelle Darby, Kensington Annex Head Start teacher. “Having a support system like this makes them [feel] accepted. It’s more prevalent because there are just so much more parents [being incarcerated] because of drug offenses.”

Sophomore Nick Prince also saw the benefits of the program.

“I felt good to witness the beginnings of a foundation that will eventually benefit a lot of people,” Prince said. “I see it taking more kids away from the streets. I think there needs to be a program recognizing a program where they can relate to.”
Sarada Jailal can be reached at sjailal@temple.edu.

Ed. Note: As part of our new Ambler Bureau, The Temple News will expand its coverage of Ambler Campus news and events.