Today is Feb. 14th. All of you gentlemen who are fortunate enough to have someone you actually want to buy a gift for know what that means. It means you go places you never imagined yourself going. For me, that place was Victoria’s Secret.

Why there, you ask? Well, I couldn’t go to someplace like Bed Bath & Beyond, because my girlfriend shops there on

occasion. I have no idea what she has or has not bought. Besides, nothing says romantic like Victoria’s Secret.

Now, as a rule, I avoid malls. As a law of physics that cannot under any circumstances be broken, I avoid Victoria’s Secret. However, I like to think that I am not completely incapable of being romantic, and so I took the plunge. Walking in, I was greeted by music that would be best described as techno/grind/sex/core, with a sultry voice singing in German about liebe and mein herz. Dread set in after about a minute of walking among the anorexic mannequins, middle-aged women and unfortunate husbands. I had no idea what I was doing. There was row after row of lotions, body sprays, body washes, facial wash, oils, and god-knows-what else.

Graciously, I was rescued by a salesgirl with a valley girl accent and a D-size bra hanging over her left arm after only five minutes (several millennia in my mind). She asked if it was a Valentine’s Day gift.

In my head, I thought “Actually, I was looking to spice up my wardrobe with a see-through garter belt and matching pink nylons.” Fortunately, my sarcasm never made it to my mouth, and all that came out was a thankful, “Yup.”

“How long have you two been together?”

“Almost two years.” Need she ask? No male steps into a store that puts a whole new dimension to the phrase “marinated in a vat of estrogen,” unless he has put in substantial time with a girl, and has decided that she is worth going to extraordinary lengths for. 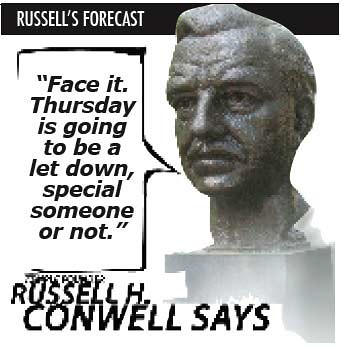 The salesgirl pointed out several bottles, either pink or red or black, all with deep musky scents. They all belonged to product names that range from innocent (“Angels”) to suggestive (“Sexy Little Things”) to ridiculous (“Very Sexy”). At the last one, I had to wonder: where was “Kinda Sexy” and “A Little More Than Kinda Sexy, But Not Quite Very Sexy, A Little Bit Like Fergie In That Video For That Song They Play Way Too Much?”

Anyway. The salesgirl left me holding a pH testing strip, daintily inscribed with Love Victoria’s Secret, that smelled like it had been marinated in a vat of…well, you know. For some reason that still eludes me, some of the bottles on the shelf had small pink stickers that read “Play With Me.” I thought it might have been a scratch-and-sniff sort of deal, but I wasn’t about to try it, because trying to scratch and sniff something that isn’t intended for that purpose is about as smooth and suave as a piece of sandpaper.

I walked around some more, trying to find something a little subtler. It came to me in a green bottle labeled Pear Glace. The scent was more fresh water than fornication, which made it a winner. I thought I had accomplished the hard part, but I reconsidered when I walked out of the mall holding a pink perfumed bag that proudly displayed its origin. Talk about funny looks.

Here’s to you, love.