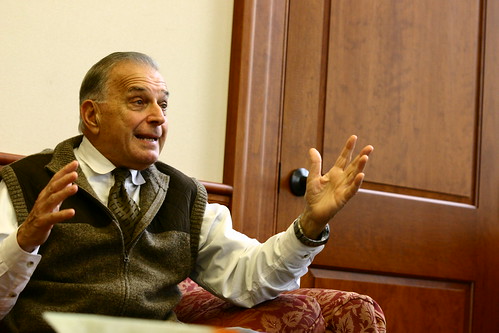 His office is in what was Temple’s first faculty building, Barrack Hall, one of those old stone structures on the 1800 block of North Broad Street. The law school, of which he was formerly dean, began in what was once a lounge not too many steps from his office today. This month marks the 25th anniversary of his choosing the Temple ‘T’ as the symbol for the university – quite literally morphing its contemporary image.

“We reshaped the message of the university,” Liacouras said.

For his work, he’s earned the arena he strove to build now named the Liacouras Center, the spine of Main Campus called Liacouras Walk, and a well-decorated office in Barrack Hall.
Outside his office window sits the Baptist Temple, where university founder Russell Conwell first conceived the college, and just out of sight, the future $79 million renovation and addition to the Fox School of Business. When Liacouras stops reminiscing long enough, he can hear the sounds of the new Tyler School of Art’s steel skeleton coming to completion. But he can’t stop noting how far the Owls have flown.

The successes keep coming. Those two projects – the business school addition and art school relocation – will be the last of the plans formalized during Liacouras’s presidency of this university. Twenty-six years after being inaugurated as president, nearly a decade after leaving office, and his work is nearly done.

He is affable, small and wintered. He speaks softly, like his gentle brown eyes and neatly raked gray hair might suggest. He is retired now, mostly, so he dresses comfortably and is quick to open up and even quicker to laugh.

His father emigrated from Greece in 1906 as a 16-year-old boy, joining two brothers already in Philadelphia. It was sometime in 1912, while in the course of his duties for the Liacouras Brothers’ Fancy Grocery Market, that Liacouras’ father stopped to hear the words of a Baptist preacher about his scouring the streets of Philadelphia for young minds, veritable ‘acres of diamonds.’ He couldn’t stay long. He had groceries to deliver.

Today, Liacouras is regarded by some as perhaps the most important figure in Temple’s 125-year history, rivaling even founder Russell Conwell, the Baptist preacher whom Liacouras’s father heard speak almost a century ago.

Liacouras was born on April 9, 1931, in the second-floor, front bedroom of 6029 Walnut St. and raised in the Delaware County town of Yeadon. He started off a Dragon, serving his undergraduate days at Drexel University. Like many of Philadelphia’s proudest sons, Liacouras ventured out of the region, the Fletcher School of Law and Diplomacy, Harvard Law and as a fellow at Yale University. Still, Philadelphia has a distinctive way of bringing them back. This city’s scars are addictive, and Liacouras has plenty.

After four years as a research associate at Duke University, Liacouras took a gig as a law professor at Temple in 1963 and never looked back, rising to the rank of law school dean in 1972. A decade later he was named Temple’s president, upon Marvin Wachman’s departure.

When he was named Temple’s president on July 1, 1982, Liacouras was facing a $52 million budget shortfall. Change may not have come immediately, but change came, indeed.
“Life didn’t start at this university in 1982,” Liacouras said. “There was a lot before it, a lot after it.”

During his administration, the university’s budget had well more than tripled to $1.26 billion in June 1999. The university’s endowment skyrocketed from $15 million in 1982 to $109 million in 1999. He led the largest development program in the university’s history, giving way to campuses or sites in London, Paris, Athens, Tel Aviv, Ghana, Seoul and Beijing. In 2000, Temple included 17 schools and colleges attended by the largest professional student body in a public university in the country.

“A lot of positive feelings centered on him as an individual,” said James White, a current member of Temple’s Board of Trustees and a former executive vice president under Liacouras. “If you have that respect, you can do anything.”

To help all of this growth, Liacouras knew there had to be a clear Temple identity. Alumnus Bill Cosby was brought in to star in a series of TV commercials in 1983, among the first national advertising campaigns for a university. Slogans were injected, alumni connections were developed, but the most identifiable image for Temple came from students.

Barely a year into his tenure, Liacouras encouraged the Tyler Art School to host a seminar class during which participating students would design an emblem for the university. In the end, 25 years ago this month, Liacouras chose the Temple “T” that is as much Temple as anything.

Today, the Temple he hoped to begin looks startlingly like the Temple we have today. Diverse. Global. A robust professional research institution.

Still, unsurprisingly, his long tenure was not without incident. Liacouras was known for leading strongly and following his own convictions.

In September 1990, Main Campus saw protests and rallies held by students and faculty after Liacouras and the board stood strong on a faculty contract that prompted a professorial strike.

“Do the students really think I’m going to give in to pressure?” Liacouras was quoted saying in the Sept. 14, 1990, edition of The Temple News. “You can put a gun to my head, and if I still believe my principles are straight, then pull the trigger.”

His administration was also criticized for beginning the seismic shift of the university’s decidedly Philadelphia student population.

In Fall 1982, 51 percent of Temple students were from the city. The percentage had been nearly halved by 2000. Contrary to some conceptions, though, the difference didn’t come from the city’s suburbs, considering that that total had dropped during Liacouras’s tenure. Instead, the number of students from the rest of Pennsylvania doubled to 14 percent and nearly one in 10 Temple students were foreign born in 2000, from 2 percent when he began.

“People said we were abandoning Philadelphia schools, but no, we were reshaping who we were structurally,” Liacouras said. “We didn’t have a large enough base in Philly to increase our student body. So, we went out of the city, we developed partnerships with the community colleges. We were giving more opportunities, not less.”

He was always looking to the future, like in 1986 when he “mothballed” plans to demolish Barrack Hall and the Baptist Temple, as if he knew then that he was reserving his future home.
Liacouras is a populist. He gives off names too quickly to write. They accomplished great things together, he will tell you. People fought him on bringing Tyler to Main Campus, on building what is now the Liacouras Center, on everything.

Once things succeeded, the administrators, bureaucrats and politicians came for credit, Liacouras said. They now lay claim. He smiles on.

“[In] three years, my memoirs will be out,” he said. “You can read about all the details.”

Watch, read, and explore the Peter Liacouras multimedia package by The Temple News

Taking over campus as the Temple ‘T’

What if the Temple ‘T’ did not exist? None of the shirts, hats, mugs, magnets, notebooks, flags, jerseys or key chains would be adorned with that single significant letter. They would be blank and ordinary