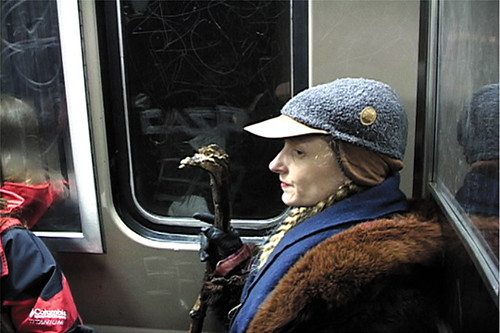 Black Lily, Inc. is like that girl who always exudes cool, even in summer humidity and under the most David Bowie-and-Queen-duet kind of pressure.

She’s an artist, a musician, a filmmaker and a trendsetter. She’s politically aware and in-your-face about it, too. Her progressive ways of thinking and dressing are often points of envy, even dislike – but she’s got enough attitude to rock her way through any situation, good or bad, and look killer while doing so.

Starting May 1, the high-heel tread marks of Black Lily, Inc. will be visible throughout the city as their second annual Black Lily Film & Music Festival kicks into action, bringing to the streets of Philadelphia some of the best women artists in country. Workshops, panels, jam sessions, screenings and concerts are all part of the four-day festival, which counts among its venues the International House, World Café Live and diner-turned-nightclub Silk City. Many of the events are free, or at least cheap – between $5 and $7.

“This is not for profit,” Tracey Moore, a Black Lily, Inc. co-chair, said. “We’ve never made any money for ourselves. It’s just something we believe in. We want to help other women. We want to further their careers.”

In 1999, Moore and her friend Mercedes Martinez – together known as the neo-soul duo Jazzyfatnastees, a many-time opening act for The Roots – started hosting a weekly jam session called “Black Lily: A Women in Music Series,” held first at the Wetlands in New York City, then for five years at the Five Spot in Philadelphia’s Old City.

“We were frustrated with the lack of female-friendly places to go,” Moore said. “We wanted to give women musicians a relaxed, low-key place to perform.”

Artists like Jill Scott, Macy Gray and Erykah Badu got their first tastes of spotlight during Black Lily sessions, and as the series became more popular, big-name acts like Janet Jackson, Alicia Keys and India.Arie stopped by to croon for Black Lily crowds.

Members of The Roots often sat in the audience, and Sean “Diddy” Combs spent a night there while traveling through Philly. The Five Spot, which didn’t have a stage, offered guests and performers an intimate experience – and became, through the success of Black Lily, the epicenter of Old City’s nightclub scene.

“It feels very special to have been a part of all of that,” Moore said. “We just happened to be in the right place at the right time with the right people. [Everyone involved with the sessions] became like a big family, because we were all peers, we were all on the same footing.”

The “Black Lily: Women in Music Series” came to an end in 2005, but Moore and Martinez weren’t ready to back down yet – and in 2006, they were approached by independent filmmaker Maori Holmes, who had interviewed the pair for a documentary called Scene Not Heard: Women in Philadelphia Hip-Hop and was interested in working with them again.

“She wanted to start a film festival that mirrored what Black Lily did for music,” Moore said. “And she wanted to use the ‘Black Lily’ name because she thought it would be easier to market. But, of course, Black Lily’s known for its music stuff, so we had to incorporate some of that, too. Now it’s larger than just a film festival or a music festival.”

Each Black Lily Film & Music Festival is organized by Black Lily, Inc., the nonprofit organization that grew out of Holmes’ collaboration with Moore and Martinez. Holmes is now president of the group, which, according to their Web site, is “committed to supporting women artists of all ages, especially musicians and filmmakers, both emerging and established, by highlighting their work and providing opportunities for networking.”

The festival itself has grown, too. This year, festival-goers can expect to see live performances by underground hip-hop legend Bahamadia, R&B powerhouse Jaguar Wright and genre-bending duo Slick & Rose, who combine jazz, reggae, soul and rock to create an entirely singular sound.

They can dance to mixes by AfroDJiak and bask in the grace and cool of Mount Airy-born MC Ethel Cee. They can learn how to DJ and attend panels on the ins and outs of the hip-hop and journalism trades. They can view documentaries about Hurricane Katrina, the Khmer Rouge genocide in Cambodia and the uncertain lives of prostitutes in the years after Rudy Giuliani cleaned up the streets of New York City.

“Everything is tighter this year,” Holmes said. “More organized, better put-together. It’s going to be a really fun and exciting couple of days.”

She stressed, though, that while the Black Lily Film & Music Festival might seem race- and gender-specific, it’s a celebration for everyone – even those who don’t know hip-hop from rap or lipstick from lip gloss.

“I want people to understand that Black Lily is for all women, not just black women,” Holmes said. “And it’s also for men, too. We want to see more men participating this year.”

This is a start. After failing to get drafted two weeks ago, senior center Lady Comfort of the women’s basketball team signed a rookie contract with the WNBA’s Los Angeles Sparks last Tuesday. She will

This past Sunday, the women’s tennis team served, hit and volleyed their way to a 4-0 win over Xavier in the finals of the Atlantic Ten Conference Women’s Championship to capture their fourth A-10 crown

City universities are unwelcome pariahs who gentrify and litter as they go, or economic saviors who enhance a neighborhood, depending on whom you ask. As with most controversies, the truth lies somewhere in the middle.