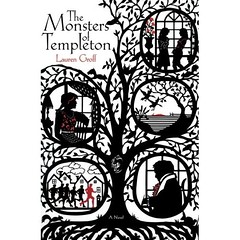 We all rely on stories, on myths. We force ourselves to believe that certain things are true, and that the truth of those things is somehow essential to way we live our lives: that there is a God, that there is no God; that an absolute standard of good and evil does exist, or that all morality is relative. We tell ourselves also that we accept these truths entirely, that our faith in them goes beyond mere belief.

Yet we, in truth, draw solace and strength from this act of belief, as if our acceptance of that which cannot be truly proven elevates us, somehow, among everyday concerns about what is and what isn’t. The point of an act of faith, one might even argue, is that it is an act of faith, a step taken without absolute certainty – an act of courage in a world of which so much is simply known.

The Monsters of Templeton, the sparkling debut novel from Cooperstown, N.Y.’s Lauren Groff, is a poignant examination of the consequences of confirmed belief. It is a story populated by ghosts, but not a ghost story; driven by love, but not a love story; inundated by the past, but not a history. It is the story of Willie Upton, a small-town girl turned big-city woman, whose faith is shaken not by its repudiation but by its confirmation. It is all of this, and more, and perhaps the finest novel to emerge from these first few months of 2008.

“The day I returned to Templeton steeped in disgrace,” begins Willie Upton’s story, “the 50-foot corpse of a monster surfaced in Lake

Willie’s quest to discover the identity of her father will lead her through centuries of Templeton history, as she attempts to unravel the convolutions and contradictions of her town and her family’s pasts. She will be forced to tread the blurry line between history and myth, between truth and legend, between the many distinct and different histories of Templeton that emerge in her research; and in doing so, will create her own version of that history, no more or less false than any other, but more true because it is hers.

Groff reveals herself to be all the things book reviewers normally say about young writers they like: a gifted prose stylist, a promising young artist, and all the rest. Yet Groff’s talents extend beyond a mere facility with the English language. The Monsters of Templeton is more than a novel, and Groff is more than its author; it is its own mythos, and she its mythologist. Yet at the same time as she creates these myths, Groff questions their meaning.

“And yet, we cling to these things. We pretend to be able to understand,” she wrote. “Sometimes, we feel it’s impossible to push into the future without such a weight behind us, without such heaviness to keep us steady, even if it is imaginary.”