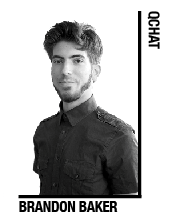 I need to stop wearing hoodies.

Famous Fox News talk show host, and quite possibly the only thing (once) attractive about the conservative news network, has at last shoved his mustachioed head farther up his butt than even republican presidential candidate Rick Santorum can muster.

“I think the hoodie is as much responsible for Trayvon Martin’s death as George Zimmerman was,” Geraldo Rivera said on the morning show “Fox and Friends.”

To clue in the five people who remain blissfully unaware, Trayvon Martin was gunned down by George Zimmerman, a self-declared “neighborhood watch officer,” in a Florida community after being spotted holding oh-so-dangerous weapons: an Arizona iced tea and – wait for it – a bag of Skittles.

But worse yet, the deviant was wearing a hoodie. You know, that foul, criminal article of clothing we’ve all been forewarned about wearing in public at the risk of being confused for a ghetto criminal about to embark on a shooting spree. Employing such a description, every Temple student trudging to the TECH Center in the middle of the night would – and according to people like Zimmerman and Rivera, should – be considered a thug.

Can you imagine if Temple or Philadelphia law enforcement operated under this kind of blind ideology?

I understand where Rivera was going with his argument, but I also understand how absolutely absurd the idea is. By such logic, where do we draw the line on blaming others for blatant acts of bias? Is a raped female responsible for her assault because her skirt was a little too short? Is a drag queen responsible for being beaten because her bloated boobs were a little too obnoxious?

The Martin case gets to the core of a fundamental problem that persists all across America, in its urban centers, its rural communities, and yes, even places like Temple. The people of this naïve nation need to wake up and realize one very important thing: This is not a post-bigot society.

When Michelle Bachmann was approached by the fabulous comedian Kathy Griffin last year and was asked if she was born a bigot, her response was simple: “Hm, I’ll have to think about that one.”

Meanwhile, public figures like Sarah Palin, by comparison, outright reject accusations of bigotry by exclaiming the classic and incredibly eye-roll inducing, “But I have gay friends” line.

The obvious problem with this is, of course, that Palin probably doesn’t have gay friends. The deeper problem, is that even if she did have gay friends, that doesn’t mean she’s not a bigot.

I come from a town where it’s popular to boast Bachmann-ism and to outright say you don’t like gay people. And honestly, I kind of prefer that instead of the veiled bigotry of certain people I’ve encountered in populous cities like Philadelphia.

In some neighborhoods of Philly, the proclamation of “I’m not a bigot” in a conversation typically translates to, “I’m extremely bigoted.” And if you dare imply otherwise, you are somehow the bigot for even bringing up the subject.

Alas, it’s now impossible to even talk about bigotry and racism without being a part of the problem. Rivera doesn’t want to talk about the obvious. He’d rather talk about how those dog-gone kids these days are wearing those silly hoodies and sporting jeans that rest well below their bottoms. How do you fix a problem if it can’t even be discussed?

Think about it, folks. Even here in the safe haven of Main Campus, veiled bias is everywhere you look. My fellow male friends, why do you think you’re charged more to get into a frat party than a girl is? I won’t even get started on the looks received upon entering most frat parties as a gay man. And I can’t recall the last time I observed a class discussion on marriage equality where there wasn’t an awkward silence – a silence that speaks much louder than any arguments actually put forth.

It seems to me that bigotry is falsely promoted by those on the other side of the aisle as “free speech.” But at what point does free speech become hate speech? Is Zimmerman merely expressing his right to speak his mind when he’s holding a gun and whispering a racial profanity? Is Dharun Ravi to be considered a documenter of history by recording Tyler Clementi having sex in his dorm room?

The line needs to be drawn somewhere, because the illusion presently existing in a world where society embraces minorities is more hurtful and progress-halting than any direct act of bigotry could ever be.

As unfortunate as Martin’s death is, it can at least be said that he – if inadvertently – died as a martyr. I don’t like that he allegedly had his life taken for such hateful reasons, but I do appreciate that the nation finally has a modern example to point to that bigotry is alive and well.

When it comes to voicing opinions on Main Campus, the limits aren’t always cut and dry.

The amendment to the Student Conduct Code will also address biased intimidation and harassment.