The U.S. House of Representatives overwhelmingly approved the College Opportunity and Affordability Act on Feb. 7 by a vote of 354 to 58. This bill will continue Congress’ year-long effort to make college more affordable and accessible.

The COAA calls for the largest increase in student aid since the 1944 GI Bill. Its primary goal is to encourage colleges and universities to avoid tuition increases from year to year. If signed into law, it would require institutions to report their reasons for tuition hikes as well as their plans for decreasing costs in the future. It would also ensure that states maintain their funding for higher education and provide additional need-based aid to students.

The bill would require that students be provided with advance information on textbook pricing so that they may plan their expenses accordingly. Faculty would also be given access to pricing information when selecting their course materials each semester.

The COAA would not eliminate the Free Application for Federal Student Aid application completely, but it would streamline the student aid application process. It would utilize a condensed, two-page FAFSA-EZ form for low-income families.

Additional aspects of the COAA include increased aid for veterans and military families, expanded support for minority families, equal opportunity for students with disabilities, an emphasis on recruiting science and technology professors and a boost to campus safety and disaster readiness plans.

Speaker of the House Nancy Pelosi is one of the bill’s major proponents.

“Making college more affordable is essential to building a strong middle class, ensuring America’s competitiveness by investing in a new generation of innovators,” a statement on the California representative’s Web site read.

The bill still has a long way to go before it can be made into a reality. It will now move to the Senate to be voted on. If it passes the Senate, it will then be sent to the White House for a final review. President George W. Bush has expressed concerns regarding the bill in the past, but has not yet threatened a veto.

If signed into law, it is unclear what effects the COAA will have for students here at Temple. Some employees in the offices of Student Financial Services, Undergraduate Admissions and the Bursar’s office said they were unaware of the bill.

Students seem to be in favor of the potentially money-saving legislation. Kim Leichner, a junior human resources management major, would be “ecstatic” if the COAA became a law.

“I’m paying a lot for tuition right now and I’m probably going to be in debt about $50,000 when I graduate,” Leichner said.

She said she would also like to see price cuts for textbooks.

“Book prices are obscene,” Leichner said. “They’re about $200 a piece and we don’t even use them.”
Ivelisse Lebron is a senior majoring in social work. Although Lebron said she believes that Temple’s tuition prices are quite fair for the education she’s receiving, she wouldn’t mind seeing them reduced.

“Private schools are more expensive and not as well-known as Temple. When you say to someone, ‘I go to Temple,’ everyone knows what you’re talking about,” Lebron said. “But cheaper is always better. If tuition goes down, hell yeah!”

Katie Hutton can be reached at kate.hutt@temple.edu. 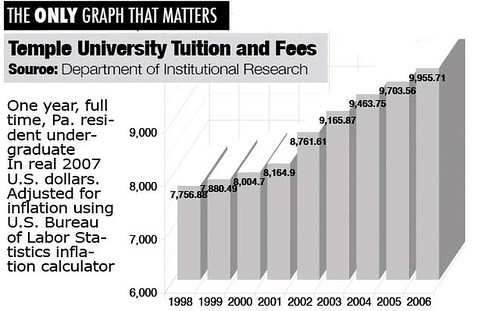