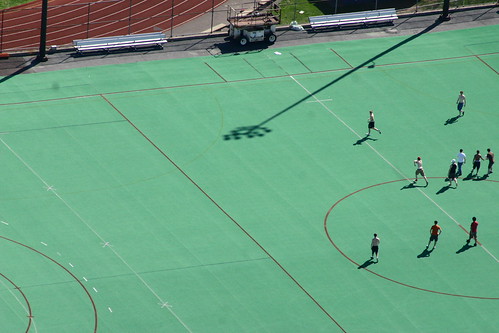 The possibility of lead leaching out of turf fields is the focus of investigation for the U.S. Consumer Product and Safety Commission, after three fields in northern New Jersey were closed due to unsafe levels of lead found in the turfs’ fibers.

The levels, which were 10 times higher than the Environmental Protection Agency’s allowable concentration of lead, have raised concerns for the university’s and the Edberg-Olson Hall football facility.

Both fields have artificial turf installed and have never been tested for possible health hazards associated with lead.

The turf at Geasey Field is made of Astroturf, a synthetic turf used as a sports playing surface, which does not contain lead.

“The lead is being found in the actual fibers of the field,” Roncase said. “I don’t believe that it is within our specific fields.”

Steve Young, director of campus recreation, said the age of the fields is a major consideration.

“My guess is that anyone who had problems with [lead] had their [turf fields] put in within the past couple of years,” Young said “Ours is 14 years old.”
“I had no idea certain turf fields leach out lead,” Jessica Cho, sophomore political science major, said. “I think it’s still a wise choice to have the field tested for lead. If there’s concern that it’s a nationwide problem, it’s a good idea.”

Though it is unknown how easily lead is absorbed by the body, it is assumed that the general risk of exposure on turf fields is low. The lead used in a turf’s pigment is inside the blades, ensuring that it does not leach out.

It is recommended that those who utilize untested fields limit their playing time and shower after contact with the fields. Also, everyone is advised to wash uniforms separately after each occasion.

“I think we have to be concerned about the safety and health of our football players,” Erika Melecio, a senior psychology major, said. “Temple should have the field tested, and in the meantime, let the football players practicing at the field know the safety precautions they should take.”

Roncase said he contacted Sprinturf and was told that a mailer had been sent out by the company stating that there is no lead in its synthetic fields. Roncase, however, has yet to receive the mailer.

“A lot of universities in Philadelphia have Sprinturf fields,” Roncase said. “I don’t think there’s anything to worry about.”

Fields throughout New Jersey and the country will continue to undergo testing for high levels of lead in the upcoming weeks.
“It’s no concern for the students except the football team,” Roncase said. “I don’t think there’s lead in our synthetic fibers.”

Kathryn A. López can be reached at kathryn.lopez@temple.edu.

A return to glory.