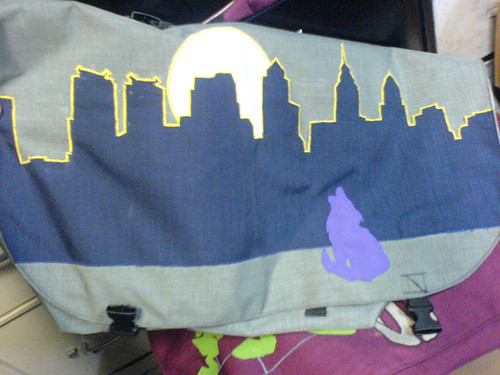 The streets of West Philly will belong to scores of fearless cyclists March 15 when the first annual Wild Wild West Race (“West Philadelphia, born and raced!”) takes place. Will Smith, eat your heart out.

In the eyes of most sane people, participants in alleycat races are truly out of their minds. These races involve droves of young people – most of whom are already extremely cocky on their bikes – kissing up to the brink of disaster by flying through busy city streets at breakneck speeds. Many participants ride brakeless track bicycles.

Hospitalizations are not uncommon.

Whenever I tell someone I’m going to a bike race, they usually ask if there are a lot of spectators or what the route will be. These races have neither. The only spectators are people who are in the way of these deranged cyclists, and the only route is the one the racer has chosen. There are no closed streets; this happens through live traffic.

Placing well in most alleycats, particularly in Philly, doesn’t come with much. Occasionally, bigger races (like the West Philly race) feature bikes and bags as prizes, but generally winners don’t receive more than a grab bag of bike-related goodies and sometimes a gag gift, usually along the lines of skimpy underwear or beer cozies. Most racers compete for glory among the small circle of avid street cyclists. Place well in an alleycat, and everyone who was there forever recognizes you as the power-horse of a cyclist that you are.

These are not traditional races. At the beginning of the race, people hand out a list of checkpoints. This is commonly referred to as a “manifest” – named after the list of completed jobs a messenger submits for payment at the end of each workday, and there is usually no order to the stops; it is up to the discretion and street savvy of the racer to decide when to hit each.
There is usually some bizarre challenge to face before the checkpoint is complete. Just to earn a signature on a manifest, I’ve taken a shot of tequila between a woman’s breasts, done 100 pushups, screen-printed a skull on a bandana, been shot repeatedly by a BB gun and rattled off the names of all five Great Lakes.

While the checkpoints are usually a blast, the real challenge is getting from one checkpoint to another. Sure, it helps to be fast, but mental stamina is equally important as physical power. You have to know just how hard you can push it before you’ll fly blindly into an intersection. There’s the need for constant vigilance to avoid death by automobile or the slaying of unwary pedestrians.

An avid racer will push oneself to lengths one never thought possible. Last summer, I was involved in a three-race series with serious prizes at stake. If I won this last race, I would take home a custom-built track frame (valued at around $1,000), as well as a handful of other goodies.

I ended up spending the night in the hospital after my kidneys shut down, expecting the rest of my body to shut down and die. Instead of a new track frame, I got the second place prize (brand spankin’ new Phil Wood hubs – the Cadillac of track hubs) and a heat stroke.

Fortunately, the Wild Wild West Race takes place on March 15, so not many heat strokes will be sustained.

“It’s more of a scavenger hunt than an all-out alleycat, but there will definitely be a lot of sweet prizes for those who push themselves.”

With more than 40 checkpoints and prizes for the top 20 finishers, this is sure to be the race of the spring, if not the race of the year. If you think you can handle several hours of grueling cycling and gruelingly hysterical checkpoints, plan to be there.

The Wild Wild West Race starts at 2 p.m. sharp, at the dog bowl of Clark Park, located on the south side of Chester Avenue between 43rd and 44th streets. More information is available at wildwestrace.blogspot.com.

Julian Root can be reached at julian.root@temple.edu.