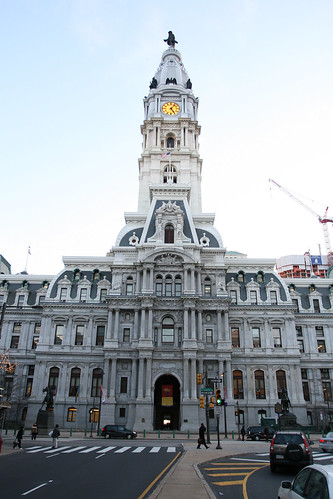 When it’s time to pay a parking ticket, apply for a permit or access public records, Philadelphia’s City Hall is the place to be. But if Mayor Michael Nutter has anything to say about it, City Hall will be much more than a government building.
He wants to revitalize the city’s center with shops, restaurants and possibly even outdoor movie screenings and weekend farmers markets.

“We want to make City Hall as visitor-friendly and accessible as we possibly can,” said Douglas Oliver, Nutter’s spokesman.

Most Philadelphia residents agree that breathing new life into an old building is a great idea.
“Philadelphia has one of the most beautiful city halls in the country, with the ugliest and most uninviting surroundings,” said Carise Mitch, a public relations director from Fairmount. “Anything that livens that space in a positive way and brings it back to the people, I am in favor of.”

“How about an arts-and-crafts fair featuring quality artwork [from some of the art schools in the area] or festivals to celebrate the various heritages that [exist in] the city?” she said.

Adam Lang, 30, from North Philadelphia, favors a different use of the space surrounding City Hall.

“The equivalent of Rittenhouse Square, except with a building in the middle of it,” Lang said. “A place where people can escape a bit of the city while still being in the city.”

However, not all people warmed up to the mayor’s proposals so quickly.

“Frankly, if you really want to make a building ‘of the people,’ Dilworth Plaza should have a designated area for ordinary citizens to rail against the issue of the day,” said Gabriella Iacovetti, a hospitality business consultant.

Farmers markets are popular in both major cities and smaller towns – and often used to boost an area’s sense of community. There has been talk about bringing a farmers market to City Hall, but this idea has been met with criticism.
“A farmers market is a silly idea since City Hall is essentially an office building for city functions. You wouldn’t expect other office buildings to have a community component to them, so why should City Hall?” Iacovetti said.

Others, however, think a farmers market could liven up the area.

“I would love a farmers market at City Hall,” Mitch said. “I’d love to have a market closer to the west side of town, and if it were open in the early evenings in the warm weather, I would stop there and shop.”

In response to the controversy, Oliver said that City Hall administrators have not made any final decisions just yet.
“We’re not yet married to the idea [of a farmers market],” he said. “We suggest the use of common areas [for these new initiatives]. None would interrupt what City Hall does.”

Manu Phatak, a finance major at Temple, isn’t too concerned about what Nutter and his staff decide to bring to City Hall – he’s focused on the big picture.

“Having businesses around City Hall sounds like a good idea. It will bring jobs, stimulate the local economy and bring wealth to the area,” he said.

“City Hall shouldn’t necessarily always be filled with government people,” Oliver said. “We want people to know that Philadelphia is a great place to live, work, raise children, start a business and more.”