Sharing the community surrounding Main Campus could lead to a gap made of more than geographic borders.

Ruby Miller doesn’t keep her windows open anymore. Otherwise, the 72-year-old Jefferson Manor resident said she would never be able to sleep.
“I don’t have anything against Temple students,” said Miller, who has lived in Jefferson Manor for 30 years and has seen the changing landscape of the area surrounding Temple. Jefferson Manor stands between 10th and 11th streets and Oxford Avenue and Jefferson Street.

“But the loud talking, the singing and slamming of doors at 11 p.m. and 12 in the morning, it’s a headache,” she said. “We have been here for many, many years, and now we’re elderly. We need quiet.” 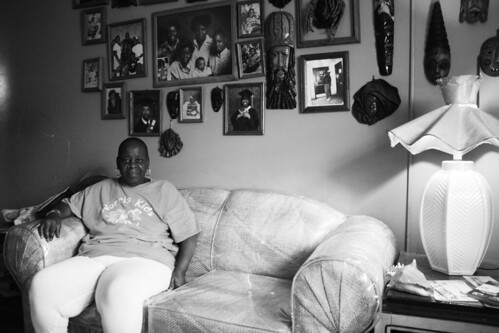 ASHLEY NGUYEN TTN North Philadelphia resident Diane Gass serves as a liason between the university and the local community members when problems arise.

With a growing student body – in 2009, undergraduate enrollment stood at 27,407 – there is also a substantial rise in the number of students who hail from other city and rural environments and inhabit non-Temple owned properties, which has diversified North Philadelphia even more. An estimated 12,000 students are expected to live on or near Main Campus this year, a 300 percent increase since 2002.

When Executive Director of Campus Safety Services Carl Bittenbender came to Temple in 1996, most of the student residential community remained on campus. The 1940 residence hall did not exist and the five-story 1300 residence hall was still a smaller, three-story building named Cooney Apartments.
“You see a transformation of the community,” Bittenbender said, noting the transformation of vacant lots and more food options. “Sadly, some of the negatives [about Main Campus] are the issues that the students have – noise, intoxication, urination, trash. When you look at it, it’s the conflict of a lifestyle. When a senior is going to bed at 11 p.m., a student’s alarm clock might be going off to get prettied up and go out.”

SHARED SPACE
Such lifestyle differences, on top of old bitter feelings toward the expansion of the university’s campus, work against a possible cohesiveness between students and the community.

“[Students] don’t get that this was a neighborhood when Temple was just a few small buildings,” Justice, a 42-year-old 10th-Street-and-Oxford-Avenue resident who wished his last name remain anonymous, said. “I never felt as a lifelong resident that Temple cared about this neighborhood.”

“Every summer, more and more students come over to our basketball courts and play,” Justice said, pointing to young children and teenagers playing pick-up basketball at the Dendy Recreation Center at 1555 N. 10th St. “We love sports. If you play ball, get on the court. But it’s amazing for them to have basketball courts and gyms [on Main Campus], and then they still have the luxury to come down here and play. We don’t have that luxury. I know you can’t help everybody, but students live here, they park here, they use our space, but we’re not allowed to use a lot of their facilities.”

TEMPORARY HOME, TEMPORARY CARE
Roberta Faison moved to Jefferson Manor in 1970 and now serves as the 55-plus community’s Tenant Council president. She witnessed houses being torn down where Anderson and Gladfelter halls now stand and watched as drug stores that sold ice cream sodas came and went. When Faison first moved to the area, she said Temple students weren’t much of a problem.

“Temple’s presence has helped the neighborhood,” Faison said, “but on the same token, it has caused trouble. A lot of students do things they wouldn’t do in front of their parents.”

For community members, it is not just the noise levels of late-night parties that bloom into neighborly issues with students.

“[Students] live here, but they don’t live here,” Faison said. “Would they throw trash onto people’s lawns at home?”

Willie J. DeShields, president of the Yorktown Community Organization, said when students rent properties, sometimes owners do not properly maintain the upkeep of the homes if they are not residents. (Editor’s Note: The North Central Philadelphia Community Special District Controls prohibits private investors from renting homes to students in Yorktown and Jefferson Manor unless the owner is a resident of the home as well. In recent years, the rule led to eviction notices for many student residents, but no one was actually evicted.)

“You can almost tell when the houses are occupied by students rather than a family who owns,” DeShields said. “The grass grows higher. If you lived in the house, you would think that that person would be cognizant of the property, but when you don’t live there, it’s out of sight, out of mind.”

“If you walk out to 11th Street, you may see a lot of trash because it’s the main road, but when you walk into Jefferson Manor, you don’t see broken bottles or graffiti,” Faison added. “With any complex or home, people take pride in their lawns and being able to take care of their properties.”

Though Palmieri has since moved away from Main Campus, he lived at 17th and Berks streets his junior year. Palmieri said he and his roommates threw parties in their house, but they were careful not to let party-goers throw smashed bottles over fences. One incident, however, beckoned the police to Palmieri’s house when a female student climbed over to a neighbors’ roof and threw a bottle from atop the house.

Though Palmieri’s house was robbed on Christmas day when no one was home – the robbers left boxes of Mike and Ike and Jujube candies – the roof incident “was the only time I really interacted negatively with the neighbors,” he said.

“Every time we looked up, Miss Jean was there watching from the third-floor window,” Pisarek said. “But she was always nice. Always said, ‘Hi.’”
Palmieri acknowledged that there is a root to the problems that exist between students and locals cohabitating in the same area: respect.
“There’s not enough mutual respect,” Palmieri said. “It’s hit or miss. We can say, ‘Hi’ to them and they might not respond, but it’s the same thing for students. Everyone is different.”

CLOSING THE GAP
Sixty-five-year-old Diane Gass, who lives in the Philadelphia Housing Authority’s Norris Homes complex between 10th and 11th streets and Norris and Berks streets, east of Main Campus, said the gap between students and the community has grown smaller. At times, though, Gass still finds herself invisible to students.

“We wish students wouldn’t be down on the people who live around here and treat everybody the same,” said Gass, who serves as the president of the Tenant’s Council for Norris Homes. “When students walk by while we’re sitting outside and don’t say anything, they don’t realize that we’re watching their cars making sure nothing happens to them.”

However, Gass said she appreciates the students who volunteer their time to assist Norris Homes. After Temple “adopted” Norris Homes in January 1995, it has since been able to set up community outreach programs pairing Temple resources to the PHA homes.

With the help of the Philadelphia Anti-Graffiti Network, children at the Norris Homes Community Center painted the tiles adorning SEPTA’s Regional Rail stop at 10th and Berks streets, which were finished and glazed by students from the Tyler School of Art.

Thomas Anderson, the now-retired associate vice president of community relations who worked as a liaison between Temple and the community for various building projects and scholarship programs, also helped organize neighborhood clean-up days for the Norris Homes housing complex.

“We had to motivate the people to want to come out and clean the playgrounds,” Gass said, recalling the first few clean-up days when Temple provided hot dogs and hamburgers. “Once the residents saw Temple students coming over to paint our playground and clean it up, they came out and started sweeping up too.”

ABSENT CONNECTIONS
But for some community members who lack the Temple connection – both Gass and Faison serve on the university’s Community Campus Council and can often contact Temple officials when problems arise – the sentiment toward the university and its students vary.

“There are some genuine [students] who care, but you have those few seeds or few bad apples just like the few seeds or few bad apples that are from the neighborhood who give students bad impressions of the neighborhood,” lifelong North Philadelphia resident Divine Allah, 41, said. “That’s how some people in the community feel about Temple. The people who are nice and interested in community cohesiveness aren’t making a lot of noise. You’re only going to bear witness to the negative things if no one speaks up.”

Anderson, who worked with the community during the initial transition and expansion of Temple, said the only way he was able to get anything done was to build up trust. Anderson visited homes, ate meals with residents and attended community meetings.

“Things have changed,” Anderson said. “All the nitty-gritty things were done years ago. Now there are different problems.”

“Getting along with the community is about respecting where you live,” he added. “Where you transfer yourself to is another community, but it’s still a community.

Get your ‘feast-esta’ on at El Vez

The neighborhood belongs to its community members, not just Main Campus.