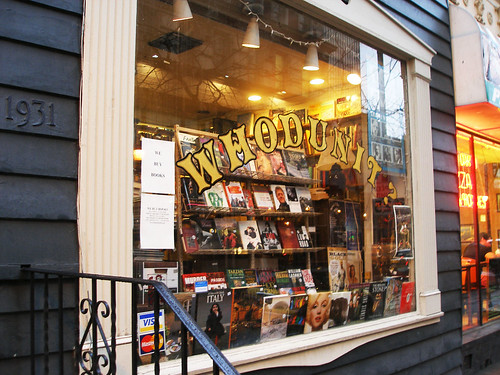 It’s a scene quite typical for one of Abercrombie & Fitch’s notoriously sexy catalogs. A boy and girl are making out amid high shelves of dusty novels in a used books store, their limbs so entangled it’s hard to tell which belong to whom.
The picture could have been shot anywhere – there’s nothing distinguishing about the setting. But Henry Reifsnyder, a partner at Whodunit Books in Center City, points it out with pride.

“They came down from New York and had a staff of about 35 people,” he said, his lips curled into a bemused smile. “The photographer likes bookstores, and he was attracted to what we have to offer – character.”

The picture – along with another, taken in front of the store – appeared in a 2004 Abercrombie catalog set entirely in Philadelphia. It’s appropriate that Whodunit was chosen as a backdrop. The small, cramped shop, which sells all varieties of used books but specializes in mystery novels, has been a Chestnut Street fixture since 1976 and seen the city through
decades of change.

“In the ’80s, it was very vibrant, thriving. The economy was great,” Reifsnyder, a Philadelphia native, said. “Then, during the ’90s, it was white flight. Everybody was just pouring out of the city. There was no construction going on, a lot of empty office space – it was like a ghost town. And now, you know, you walk around the city and there’s construction everywhere. And people are moving in and everybody wants to live downtown.”

Reifsnyder has worked at Whodunit for 25 years and been a full partner for 11. He’s well known by the store’s regulars, as is the founder Art Bourgeau, a published mystery novelist who counts among his friends longtime Philadelphia Daily News columnist Pete Dexter and prizefighter-turned-actor Randall “Tex” Cobb.

Bourgeau’s wife, Patricia MacDonald, is famous in the world of mystery literature, the author of 12 widely read novels and winner of the 1997 literary prize at France’s Deauville American Film Festival.

A blown-up version of the cover of MacDonald’s book Little Sister is one of many items hanging on a cluttered wall in Whodunit’s back room. Also hanging are photographs, vintage movie posters, classic record sleeves and a tiny pistol carved from wood – a fascinating collage that seems to capture the essence of Whodunit. The store’s devotion to history, diversity and eclecticism has helped keep it afloat even in times of serious economic struggle.

“It’s a tough business,” Reifsnyder said, but his shrug displayed a lack of worry.

Business right now is booming – or, at least, as booming as business at a used books store in the highest rent area of town can be.

“We’re making more money now than we ever have, but our expenses are also way up,” Reifsnyder said. “[Our old landlord] sold the building and the new landlord tripled the rent.”

Luckily, gentrification doesn’t exist on the Internet. Recently, Whodunit began selling used books online as well as in the store, a move that has turned out to be quite profitable. It has also helped extend Whodunit’s name and reputation beyond city limits.

Operating a business in Philadelphia – a city of Mummers and murders served whiz, wit – isn’t always a cakewalk, but it comes with its share of interesting tales.

“Most of my stories are unprintable,” Reifsnyder said.

The store will buy books from anyone – people looking to sell the personal libraries of loved ones who have passed away, book dealers, customers, even trash pickers.

“One of our trash pickers came in one day with a big trash-bag full of books,” Reifsnyder said. “I started to go through them and they were all first editions from famous authors and they were signed. I said to him, ‘Where did you get these books?’ Because, you know, I thought they were hot, stolen. And he goes, ‘Well, I can’t tell you,’ and I said, ‘Well, gee, if you don’t tell me, I’m not going to buy the books from you.’”

As it turned out, the trash picker had found them while rooting through a dumpster beneath the Walnut Street Bridge, and when Reifsnyder walked over to have a look, he couldn’t believe his eyes – or luck.

“The dumpster was filled with these books. Thousands. And, I mean, some of the books were worth $500, $600 a piece. What had happened was a landlord had gone into this one author’s apartment, and the author had moved out [leaving all of his books behind], and the landlord just threw them out.”

Reifsnyder and Bourgeau tried to get in touch with the author, but couldn’t, so they ended up selling the books.
“We did OK that month,” Reifsnyder said, a bit wryly.

Whodunit isn’t the most famous of Philadelphia bookstores. Its location at 19th and Chestnut streets is slightly off the beaten path for Center City shoppers, and it doesn’t get the attention of Old City’s The Book Trader and Big Jar Books, which are popular among the First Friday crowd. But it’s a well-established haunt that doesn’t show any signs of disappearing – and worth a browse if only for a taste of its very Philadelphian character.