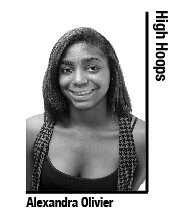 Senior guards Shey Peddy and BJ Williams get in sync.

There is a chemistry on the women’s basketball team that is steering them towards success. This chemistry has resulted in yet another win, this time against the Massachusetts Minutewomen, 77-55, at the Liacouras Center on Saturday night.

Senior guards Shey Peddy and BJ Williams have consistently set the bar for the intensity on the court, as they have recorded team highs in points and assists, respectively, for the Owls.

“I think [Peddy] and I have been working very hard in practice and [coach Tonya Cardoza] puts us in great situations in practice where we’ve been working on our chemistry a lot,” Williams said. “Towards the beginning of the season I think we’ve struggled a lot and I think it’s been like the perfect timing now that we’ve found it and I think we both know where each other is going to be on the court. We just flow.”

Cardoza said she notices the growth of each of these players.

“I mean obviously I knew what [Peddy] and [McCarthy] were going to do because they played a lot of basketball, they started last year and I knew the things they contribute,” Cardoza said. “The biggest thing for us was wondering what [Williams] was going to do in her new role. Where now she’s a starter and now she has to be a leader.”

Although Williams does not lead the team in scoring, the Gwynn Oak, Md. native has a team leading and Atlantic Ten Conference best 4.9 assists per game. She has a knack for creating plays and spreading the scoring amongst her teammates.

“Obviously, she’s not our leading scorer, she’s not our leading rebounder but she’s our most important player,” Cardoza said. “She’s that extension of me on the floor. It’s to the point now even in practice I just say something to her and she runs the first squad. It’s so rewarding to see her grow from her freshman year to now.”

Williams’ emergence as a leader is an example that Cardoza points out to the freshmen guards like Monaye Merritt who has struggled during this season.

“My freshman year I just struggled a lot, sophomore year I struggled and last year I thought that I was put in a lot of situations where I was able to view the game from the bench first and listen to what coach was saying and be an extension of her from the bench,” Williams said. “This year [Cardoza] and I get along very well and the chemistry that I have with everybody on the team – it flows from the coaches onto the team and now everybody trusts me as much as they trust [Cardoza.] She doesn’t have to say much because were just kind’ve in sync so I think that’s what helps.”

Williams was able to drop a season-high 21 points against Saint Louis on Feb. 8, showing her versatility as not only a playmaker, but a shooter as well.

“I think everybody on the team has been doing a great job of giving me confidence to shoot the ball and they fell a lot during Saint Louis and I have confidence now,” Williams said. “So, everything’s just flowing in there. I’m just trying to contribute.”

Peddy and Williams do a good job of changing the pace of the game and teaching the younger players how to control the game.

Peddy’s aggressive attitude toward playing defense is a model that the team obviously takes after. When watching the women play, Peddy’s intensity make her teammates try to match her.

Peddy managed five steals in 23 minutes of play against the Minutewomen. Her passion for defense is shared by her teammates who all attack the ball to capture their own steals like Merritt who grabbed two of her own.

“I don’t really think about scoring or trying to score. I just try to go out there and play defense. My offense will come with my defense,” Peddy said.

With four regular games left in the season, the trio is focusing on finishing out strong. The emergence of this Peddy-Williams leadership will play an important role in the remaining matchups.

Senior guard BJ Williams will become a member of the Big Three. After reaching the NCAA tournament for the eighth consecutive year last season, the Owls look to try to make this year a memorable

The women’s basketball team started off cold, got hot, took control, then lost it and yet somehow managed to pull away in the final seconds in a narrow victory over Atlantic Ten Conference rival Duquesne.