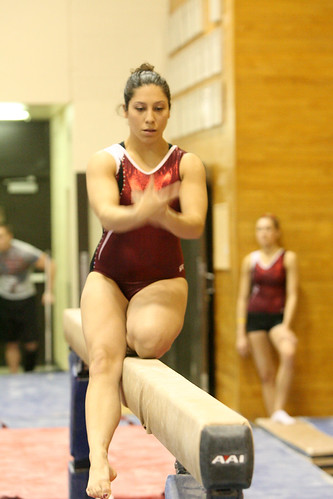 The Owls will rely on its pair of senior captains to improve their young squad.

Confidence is running high for the women’s gymnastics squad on North Broad Street in 2012.

The Owls, who are returning three seniors and one graduate student, are loaded with youthful talent up and down the roster. Of the 24 members on this year’s team, eight will be making their debuts as freshmen and seven more women will be entering their second campaign as collegiate gymnasts.

Coach Aaron Murphy is entering his sixth season as commander of the women’s gymnastics program, and the 2009 Eastern Collegiate Athletic Conference Division I coach of the year doesn’t think the youthfulness of this year’s team will be an issue.

In 2011, Temple placed in the Top 3 in six of their nine meets, and Murphy thinks this year’s team has the same ambition.

“The talent is there,” Murphy said. “Our job as coaches, we have to evaluate their skill level. If it’s there and up to the level of college gymnasts, then we just have to clean them up.”

Senior Alexandra Uscatu enters her fourth and final year at Temple. In 2011, Uscatu was one of only three Owls to compete in the United States Gymnastics Championship Finals. Uscatu tied for second place during session one on vault, and placed eighth overall.

“It’s a really big honor [to represent Temple],” Uscatu said. “I know that I love this team, and I love these girls. It’s more than just a team. This is my family.”

Senior Corrine Williams enters her final year at Temple with an impressive résumé. Corrine has compiled a total of six plaques on the wall of the Temple gymnasium. In 2010, Williams was one of three Owls to compete in the United States Gymnastics Championships, placed second in all-around during session one and managed to place eighth overall on uneven bars.

“[I have to] maintain, keep up what I’ve been doing for the last three years, and do it until the end,” Williams said. “No injuries, and come back with some more awards.”

Uscatu and Williams will both play critical roles in helping Murphy achieve the goals he has set out for himself and his team.

“ECAC Championships, man is it tough,” Murphy said. “You’ve got seven pretty equal teams at that time going into the tournament, you’re going to battle it out head to head.”

“The past few years we were around third place, then last year we dropped to fourth,” Murphy added. “It’s time to get back in the Top 3. I already have two third place trophies, it’s time to add a second or first.”

Chase Senior can be reached at chase.senior@temple.edu.