Sophomore guard Khalif Wyatt paid his dues before earning his role as the sixth man.

Coming out of Norristown High School, sophomore guard Khalif Wyatt of the men’s basketball team was undeniably “the man.” Since becoming an Owl, however, Wyatt has been forced to work harder just for a chance to see the floor. 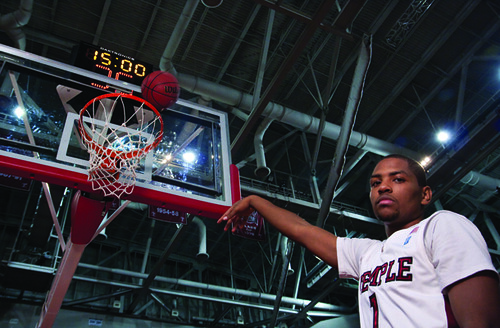 While at Norristown, Wyatt was named Second Team All-State during both his junior and senior years. As a junior, Wyatt led his team to a 33-2 record en route to a state championship game appearance where his team fell to Chester High School, which was led by Wyatt’s future teammate, sophomore forward Rahlir Jefferson.

As a senior, Wyatt averaged 20 points, four rebounds and four assists per game while, leading Norristown to the Pennsylvania Interscholastic Athletic Association AAAA District Title. Wyatt’s accolades helped him accrue offers from Niagara, Delaware and La Salle, along with Temple.

When it came down to it, however, Temple coach Fran Dunphy’s straightforwardness led the 6-foot-4-inch guard to take his talents to North Broad Street.

“Coach Dunphy was 100 percent real with me,” Wyatt said. “He told me nothing was promised, and I would have to work for everything I’ve got. He told me how much work I still had left to do. Unlike the rest of the schools that were recruiting me, he told me I wasn’t as good as I could be. He didn’t promise me anything. My mom and I liked that.”

One of the necessary points of improvement Dunphy mentioned was Wyatt’s fitness. In high school, Wyatt struggled with maintaining his weight, despite his constant efforts to shed his baby fat.

“I’ve been trying to get in shape since forever,” Wyatt said. “My junior year, I was out of shape. My senior year, I was still out of shape. Coming into my freshman year, I got in better shape but I still wasn’t in good enough shape to play. This past summer, coming into my sophomore year, I got myself into the best shape I’ve ever been in, but still not the greatest shape. I try to get better every week and keep progress of my fitness.”

“I didn’t really know what to expect coming in,” Wyatt said. “I knew we had a lot of guards, but I was always really confident in myself. I thought it would be different since I could score, I might get some minutes. But, I wasn’t in good enough shape. I didn’t play enough defense.”

Wyatt’s sophomore year at Temple has produced drastically different results. During the offseason, Wyatt got in better shape and concentrated on playing defense, something Dunphy requires from all his players.

Wyatt’s hard work paid off as he, along with sophomore guard TJ DiLeo, quickly became one of the first guards off the bench.

When junior guard Juan Fernandez was forced to miss games because of a bone bruise, Wyatt found his way onto the team’s starting lineup.

With the extra playing time, Wyatt, over the team’s last seven games, has averaged 14.4 points per game.

“[Wyatt’s] really a good scorer,” Dunphy said. “He knows how to get the ball in position to score, whether it’s a jump shot or driving it to the rim … he’s that good of a basketball player.”

On the season, Wyatt is fifth on the team at 8.7 points per game, while playing 16.4 minutes per contest. Wyatt’s play has put him in consideration for the Atlantic Ten Conference’s Sixth Man of the Year award, an honor junior guard Ramone Moore earned last season.

“I don’t really focus on individual awards,” Wyatt said. “I know Ramone won last year, but he wasn’t worried about it at all. If I keep helping the team win and playing my best every night, the individual stuff will come along with the team success.”

Wyatt’s decision to come to Temple forced him to bide his time while increasing his work ethic in practice and in the weight room. In the end, however, Wyatt said his decision was the right one.

“I could have probably went somewhere else and played a lot last year, but Temple wins,” Wyatt said. “We win a lot of games. Coach Dunphy is making me a better player, a better man and a better person. I can see I’m getting better underneath him. No other school could have offered me coach Dunphy. He’s the reason I picked this school and why I’m happy with my decision.”

Temple overcame an 18-point deficit to defeat No. 25 Florida State University 89-86 at the Barclays Center in Brooklyn, New York.

The team’s pursuit of a fourth-straight A-10 title came up short. After winning three-straight Atlantic Ten Conference championships, the men’s basketball team’s reign came to an end after losing, 58-54, in the A-10 semifinals last

Women’s basketball remains undefeated due to the play of three players. It’s been a tale of two halves for the women’s basketball team this season. On the one hand, there was the team that went