After having found a copy of the book in his library, I once asked my father just what Hemingway’s The Sun Also Rises was about. Some years had elapsed since he last read it, and so my father answered me as honestly (and, it turned out, accurately) as he could: “It’s about people living, mostly.”

Such a description applies equally to the content of Yesterday’s Weather, a collection of short stories by Booker Prize-winning author Anne Enright. Yesterday’s Weather is about people — predominantly Irish people — living and facing “the ordinary tragedies of life and death that Ireland absorbs, respects and buries, without altering its stride.” It’s a simple description, true, but these are simple stories — although no less powerful for all their simplicity.

The stories in Yesterday’s Weather span 19 years of Enright’s writing, which is compiled in reverse-chronological order — the opposite of most collections of this type. This technique reveals an interesting truth: The Enright of the first few stories is very different from that of the last.
“It is a great and private joke,” Enright writes in her introduction, “to see myself getting younger . . . as the pages turn.” In front of the reader’s eyes, Enright sheds not only years but the mellowed wisdom and acceptance that have come to her with age. The younger stories are more varied and experimental, but also more undercut by the immaturity and fears of a young writer. 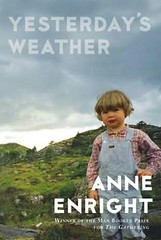 If her younger stories are laced with a bitter cynicism, Enright’s older and newer stories are marked by a wry sadness that, to compare her to another great Irish writer, reminds the reader of James Joyce at his best and most intelligible. As she ages, Enright’s literary specialty becomes the family, buoyed by love as much as it is weighed down by memories of betrayal and the ghosts of unfulfilled dreams.

Enright’s most powerful moments come when her older, more fully-developed voice brings to life the mundane details that anchor her stories firmly in reality. In The Cruise, she writes “watching them go through the departure gate at Dublin airport, her mother in a powder-blue tracksuit and her father in white running shoes — Kate realized that they would die. It was the tracksuit that did it.”

Yesterday’s Weather is a strong collection from a strong writer — an author whose work proves her worthy of literary accolades she has received since first published 19 years ago.

However, it’s not a lighthearted collection. Her stories focus on life’s largest tragedies — infidelity, depression, death. It’s surely not a feel-good summer read with such macabre writing. But she does it with the utmost skill. In fact, Enright may be one of tragedy’s most talented chroniclers.

He can be reached at pchomko@temple.edu.

Book Worm: A tall ‘upstate’ tale for the 21st century

Many graduates are moving back home after college. Prepare yourself now.