They had been chosen to go before the presidential nominees were selected, but the surprise was worth the wait. 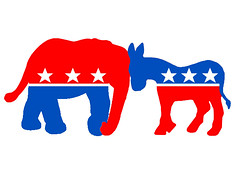 The Washington Center, a non-profit educational organization, gave six Temple students the opportunity to attend the political conventions this summer. Half went to the Democratic National Convention in Denver, while the other three attended the Republican National Convention in St. Paul, Minn.
The students were behind the scenes at the conventions.

LaCole Foots, a junior political science and communications major was given the opportunity to go to the DNC after a student who was originally selected to attend couldn’t go.

“I saw Barack Obama speak. It was incredible,” Foots said. “Everyone in my row was crying when he accepted the nomination. I saw it on television afterwards, and it looked totally different. It just looked like he was on stage. You couldn’t see the crowd reacting.”

Senior Ian Peterson, a political science major, said he was impressed by Sen. John McCain’s speech at the RNC.

“On the fourth night when John McCain spoke, everyone was in tears, especially when he spoke about his prisoner of war experience,” Peterson said. “He sealed the deal for us. People now had a reason to go out and vote for McCain.”

The process started in October when students from the political science department and the Honors Program were invited to submit essays on why they would be a good representative at the conventions.
Sophomore international business and finance major Robert Orloski didn’t think he would be accepted because he was only a freshman when he applied to go to the RNC.

“I jumped for joy.” Orloski said. “I remember I waited all day for a response, and at 4:30 p.m., I went to the honors lounge and I got the e-mail there, and then went into [director] Ruth Ost’s office and jumped for joy.”

The students attended seminars for a week before each convention. Seminar speakers included politicians and convention committee members from the parties.

Leah Daughtry, CEO for the Democratic National Convention Committee, had an impact on graduate student Neil Deegan when she spoke at a DNC seminar.

Joyce Kang, a sophomore political science and theater major said she enjoyed having intelligent debates and learning new things during the seminars.

“The best part for me during the first week was talking to people who had an interest in politics,” Kang said.

At the conventions, students were assigned to various organizations and were heavily involved.
Kang worked with the Boston Globe, where she made sure reporters received press releases and lists of daily speakers.

For Orloski, going to the convention gave him a chance to be with a large group of people who share the same interests as him.

“The two weeks being there was great,” Orloski said. “Being surrounded by all of the republicans, it was like the utopia of an Eagles game without a single Cowboys fan, and everyone is rooting for the same team.”

With the addition of an electric police car, Temple has made a step toward becoming more environmentally friendly.

Staying in college not the right path for all

Getting into college isn’t a straight path to a diploma. Some students find life happier outside of the classroom.